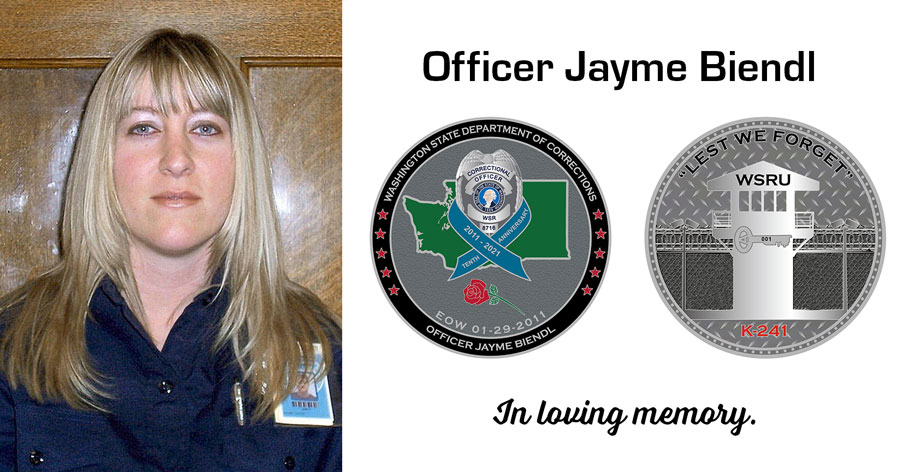 We are approaching the anniversary of our fallen Sister, Officer Jayme Biendl, who was killed in the line of duty on January 29, 2011 at the Monroe Correctional Complex. Jayme lives on with us in our hearts - we will always remember and honor her. She paid the ultimate sacrifice while working to serve and protect our communities.

Your Union had previously established a scholarship in Jayme’s name - the Jayme Biendl Working Womxn Scholarship. Through collaboration with Gonzalez, this led to the idea of the proceeds from the coin going to the scholarship. Your Union's Executive Board embraced this idea and unanimously approved the sponsorship of the coin.

The Jayme Biendl Working Womxn Scholarship was established in Jayme's memory to support the continuing education of working women who are members of Teamsters 117 and their dependents.

When an officer’s life is lost in the line of duty, we vow to “never forget.”  With the 10-year anniversary coin and the creation and maintenance of the scholarship, we are keeping that vow - we will not forget.

The Officer Jayme Biendl Challenge Coin has sold out and is no longer available for order. If more coins become available, we will notify the DOC membership by email. To update your email with the Union, please click here.

Coins will be shipped out starting in mid-October. If you have questions about your order or about the coin, please contact Edwin Gonzalez at [email protected].