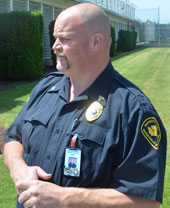 Yesterday was an extraordinary day at our interest arbitration hearing.  Three Local 117 members gave incredibly powerful, heartfelt testimony on behalf of Teamsters at the Department of Corrections.

Your Union’s legal team called Alicia St. John, a mental health counselor at the Monroe Correctional Complex, Michelle Alejo, an LPN4 at the Washington Corrections Center in Shelton, and Eric Smith, a Correctional Sergeant, who is also employed at WCC.

St. John talked about the stresses of working inside a prison.  She compared her current job to working at another state agency and how much more stressful corrections’ work is.

Alejo described the dangerous working environment as well as issues with shift differential, and the ongoing difficulty of recruiting and retaining qualified nurses at WCC.

Sergeant Smith was the last member to testify.  Smith spoke candidly about how corrections’ work has impacted his personal life.  The experiences he shared were so moving and intense that the State requested a break at the end of his testimony.  The emotion in the room was palpable.  Instead of cross-examining the witness, the State’s counsel simply said, “Thank you for your service – no questions.”

St. John, Alejo, and Smith were all professional, persuasive, and effective.  We should all thank them for their outstanding participation in the hearing.

Before members testified, your Union’s legal team presented a 15-minute film that provided the arbitrator with insight into working conditions inside a prison.  After the film, your Union called Dr. Suzanne Best, a licensed psychologist, who studies the mental and physical toll that public safety work takes on the individuals who perform the work.

The day ended with another Union witness - Will Aitchison – an attorney and financial expert based in Portland who talked about how much purchasing power Washington State correctional employees have lost as compared to the consumer price index over the last several years.