Posted by Paul Zilly 746sc on May 16, 2016
Hoffa Walks Picket Line with US Foods Teamsters 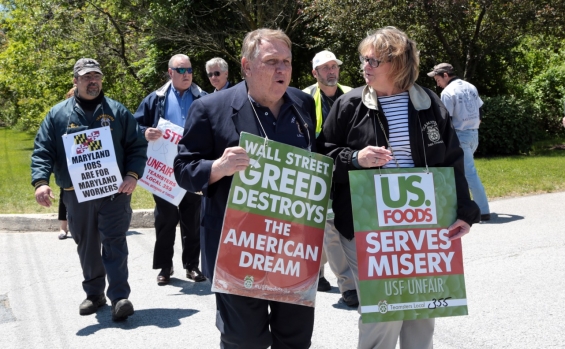 Teamster General President, Jim Hoffa, walked the picket line today with members who work at the US Foods facility in Severn, MD. Teamsters in Maryland have been on strike for almost three weeks.

In the last several months, Teamsters at US Foods have also been on strike in California and Phoenix, with members in several other locations honoring picket line extensions.

“US Foods is attempting to pull these workers out of the middle class,” Hoffa said. “Slashing pay as well as health and retirement benefits is no way to ensure that this formerly Maryland-based company remains a good corporate partner in the Free State.”

Teamsters General President Jim Hoffa this afternoon met and walked the picket line with some 50 members of Locals 355 and 570 engaged in an unfair labor practices strike against US Foods at its Severn, Md. facility for almost three weeks.

Nearly 200 Maryland Teamsters working at the distribution center went on strike April 27. Warehouse workers and drivers filed charges with the National Labor Relations Board, alleging that US Foods has bargained in bad faith about its decision to close the Severn facility in June.

Hoffa said the workers are standing up to threats by the company that would cut wages and benefits for each of them by about $40,000 a year. READ MORE