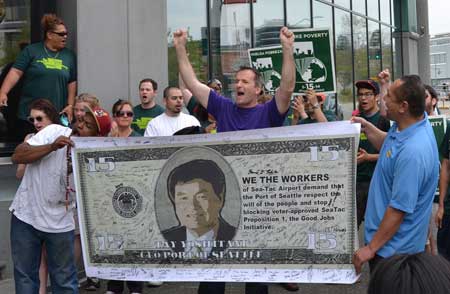 Working families all across the country are fighting to raise the minimum wage to a living wage.  Now the spotlight is on Seattle.  This Thursday, the City Council could vote on amendments to the Mayor’s $15 minimum wage proposal.

Corporate interests are intensively lobbying the City Council to water down the proposal.  We believe the Council should make the ordinance stronger, not weaker.

Raising the minimum wage benefits all of us.  It strengthens our economy by putting more money in people’s pockets.  As a Union, lifting the floor helps us negotiate higher wages for all of our members.  Together, it allows us to build an economy from the middle-class out, not “trickle down.”

Please call and/or e-mail City Councilmembers today to let the Council know that you support raising worker wages in Seattle.

Here is a sample message to communicate to the Councilmembers:

"I urge you to vote now to approve the Mayor's $15 minimum wage proposal, with no delays and no weakening loopholes.  Seattle City Council needs to:

Thank you for joining Teamsters 117 in supporting a living wage for all workers!