Lobby Day 2018: A great day for Teamsters in Olympia

It was an impressive sight - hundreds of Teamsters and their family members gathered on the steps of the legislative building in Olympia for our 2018 lobby day. 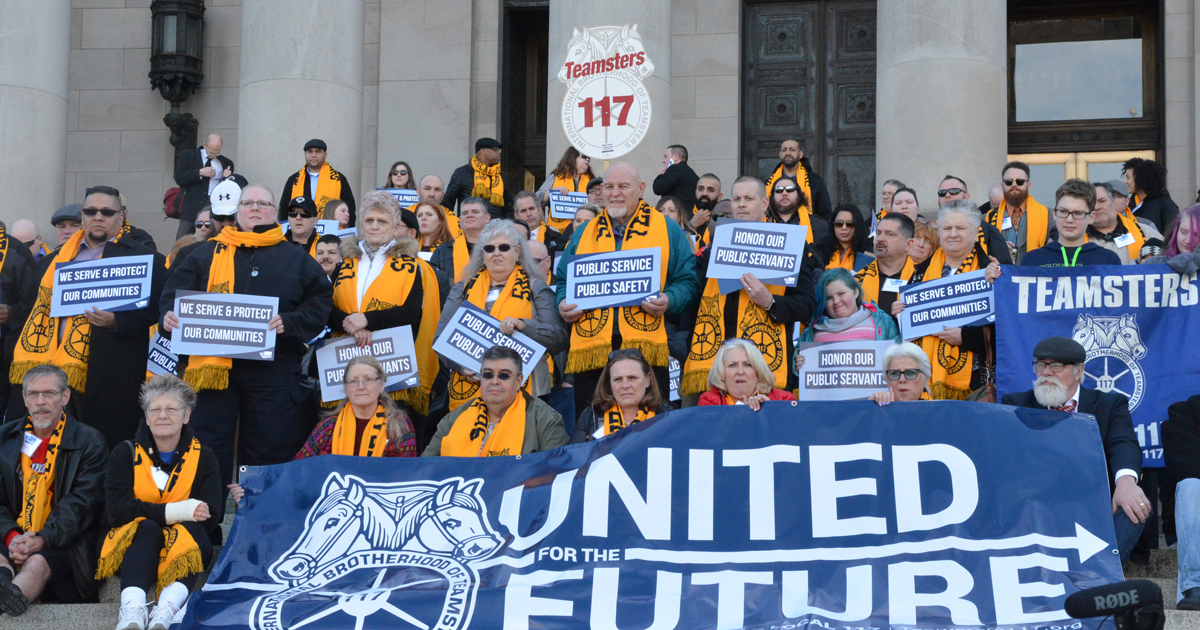 Members of Teamsters 117 gather on the steps of the state capitol in Olympia for a Lobby Day rally.

It was an impressive sight - hundreds of Teamsters and their family members gathered on the steps of the legislative building in Olympia for our 2018 lobby day.

Michelle Woodrow, our union’s president addressed the crowd: “Thank you for your outstanding service and for keeping our communities safe.” View photos from the event here.

Just a short time earlier, Local 117 members had clustered outside the doors of the Senate and House chambers requesting meetings with their legislators.

With a cutoff to pass bills looming, conversations had to be short and direct.

“We just met with Senator Sheldon,” said Sergeant Larry Reeves of the Washington Corrections Center. “He said he would be more than happy to support a bipartisan effort to see if we can get our staffing model audit funded.”

“This is wonderful,” said Fran Deel, a nurse at the Airway Heights Corrections Center who brought her three grandchildren to the event. “I’m here to make sure our rights are represented and to make sure our union has the power to negotiate.”

In addition to calling for an audit of DOC staffing levels, we urged legislators to pass bills that protect the privacy of public employees and give us a better opportunity to welcome new employees into the union.

The day’s activities culminated with a rally on the capitol steps.  Newly-elected Teamster councilmember of the City of Burien, Pedro Olguin, fired up the group with a series of chants.

Pinero, who made the trip to Olympia with his wife Angelic, talked about Teamster pride and the need to defend our union. “I started with the Teamsters in 1974 and have always been treated well by the Teamster family fighting for better benefits, better conditions, and better pay.”

“But senior Teamster staff can’t do it alone,” he said. “We are the union. You are the union. We need to take the bull by the horns to fight off these attacks together.”

John Scearcy, our union’s secretary-treasurer, echoed Pinero’s call for unity.  “When we stand together, we’re stronger. When we talk about our core values and find out where we align, we can move an agenda. This lobby day is a perfect example of us showing that when we’re committed to each other, we are strong and our voices will be heard.”

Sign in with or
Don't have an account? Click here to create one.
Please check your e-mail for a link to activate your account.
No recent activity
Gearing up for Lobby Day in Olympia
Lobby Day 2018: A great day for Teamsters in Olympia
TEAMSTERS POWER