DOC Shop Stewards meet to gear up for contract negotiations 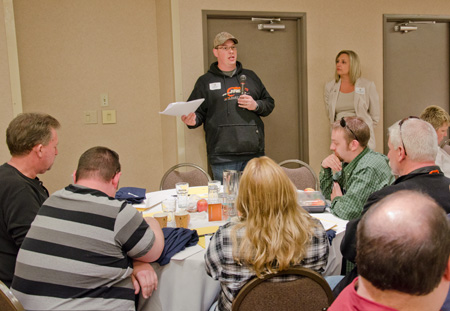 DOC Shop Stewards from across the state met in Seattle on Friday for their annual seminar and to prepare for upcoming contract negotiations. The day kicked off with the group reviewing the results of contract surveys that a record number of members had filled out.

The surveys identified several priorities that your Union's bargaining committee will use to develop proposals.  One of the most important priorities, of course, is compensation.  In the state's last salary survey, published in 2009, the state identified many DOC job classifications that are paid up to 25% or more below the market average.

"Interest arbitration is a means to break an impasse," Thal explained. "In the private sector, union members have the right to strike.  Now, thanks to the MOU signed by the Governor, we will have the ability to present our proposals before an arbitrator should we reach impasse during negotiations. Anything that we cannot reach agreement on in the normal process of bargaining is open for discussion in interest arbitration."

Thal reminded Stewards that we will be facing an additional challenge with respect to our interest arbitration rights as they relate to our contract; namely, any interest arbitration award, no matter how favorable to the union, will need to be funded by the state legislature.

Ensuring that the legislature funds our contract will require our collective efforts as a union.  All Teamsters at the DOC will need to get involved and talk to their representatives in Olympia to make sure that our contract is funded.

In an effort to increase member involvement in the political process, we will be organizing a series of political action committee meetings this spring all across the state.  We strongly encourage you to attend one of the meetings in your area.  If you are interested, please contact Political Action Coordinator Dustin Lambro at 206-441-4860.