It’s a victory a decade in the making. For ten years, Teamsters across Washington State made phone calls, wrote emails, and met face-to-face with legislators. We rallied on the steps of the state house, spoke out in the press, and marched around the Capitol grounds in Olympia. 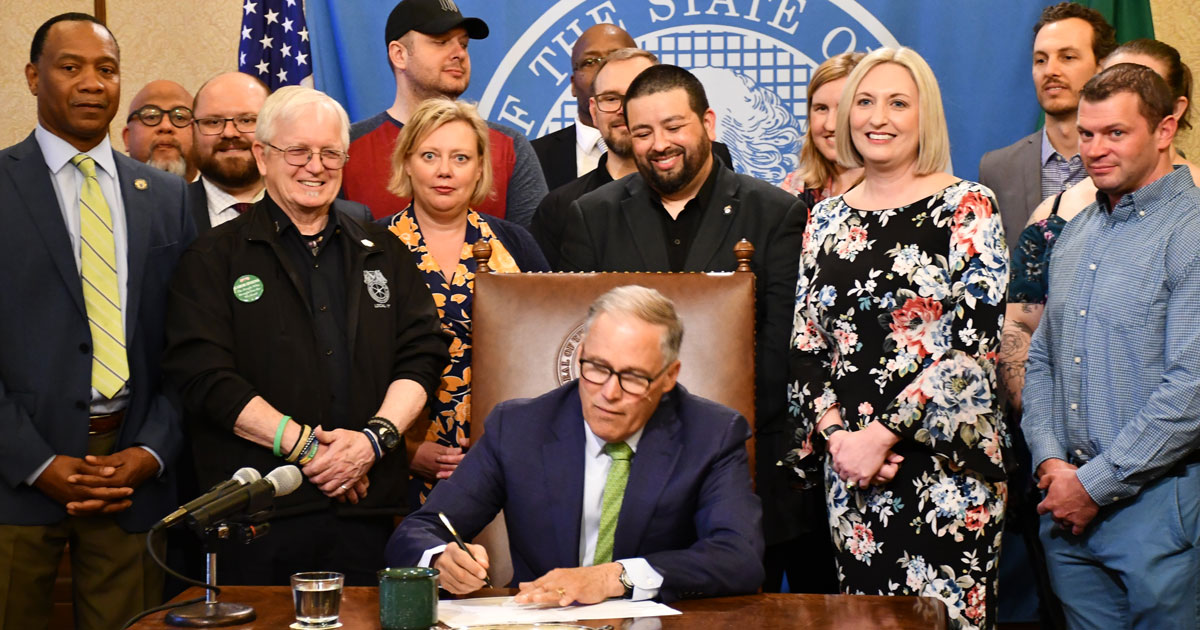 Governor Inslee signs a bill granting interest arbitration rights to Teamsters who work at the WA State Department of Corrections.

It’s a victory a decade in the making.

For ten years, Teamsters across Washington State made phone calls, wrote emails, and met face-to-face with legislators. We rallied on the steps of the state house, spoke out in the press, and marched around the Capitol grounds in Olympia.

Now, after years of perseverance, we have achieved an historic win.

On April 30, Governor Inslee signed a bill that immeasurably expands the rights of 6,000 Teamsters at the Department of Corrections (DOC).

The new law grants our union access to interest arbitration, a right essential to public safety professionals and one that has been denied our members for decades. Making the victory even sweeter, Inslee signed a similar bill on the same day that benefits Teamster officers at the University of Washington Police Department (UWPD).

“Our corrections and law enforcement members put their lives on the line to protect the public,” said John Scearcy, Secretary-Treasurer of Teamsters 117, who made passage of the bills a top priority. “Interest arbitration ensures our members are treated with respect.”

"Interest arbitration ensures our members are treated with respect."

Interest arbitration is a complete game-changer when it comes to the power our union can leverage at the bargaining table. Without interest arbitration, we had little recourse when negotiating over issues like wages and working conditions. Not surprisingly, the State exploited its advantage by engaging in frustrating cycles of take-it-or-leave-it bargaining.

These new laws allow our union to push mandatory subjects of bargaining to a neutral arbitrator if we reach impasse in negotiations.

The ramifications are huge. Over the last three contract cycles, our DOC members have been able to access interest arbitration, first through a Memorandum of Understanding signed by the Governor, then through a negotiated provision in our contract. With interest arbitration, we have prevented concessions, strengthened language and increased wages for DOC Teamsters by a minimum of 28.3% over six years.

Getting to the goal wasn’t easy. Ross Hunter, the Chair of the House Appropriations Committee blocked early drafts of the bill. Later, the State Senate lacked the votes to pass the legislation. But thanks in part to our union’s powerhouse political program, the legislative landscape in Washington State shifted in 2018, creating an environment for change.

“We worked hard to elect legislators who were supportive and that approach paid off,” Scearcy said.

Under Scearcy’s leadership, our union made another major push during this year’s legislative session. In 2019, we had our largest, most successful lobby day ever. Over 200 Teamsters and their families converged on the State Capitol to talk with legislators about the need to get the law passed.

Now, after years of determination and hard work, a goal once thought unattainable has become a reality.

“I’m proud to be a Teamster,” said James Deuel, a corrections officer at the Washington Corrections Center in Shelton. “Interest arbitration levels the playing field with management. It gives us the opportunity to fight for what we want and what we need.”