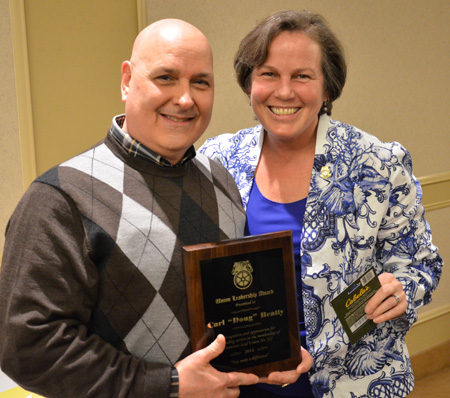 No one is more deserving of recognition than MCC's very own Carl Beatty.  Carl earned the distinction of DOC Shop Steward of the Year at the DOC seminar in Seattle on Friday before a room of his peers.

Secretary-Treasurer Thompson presented Beatty with a plaque and a gift card for his outstanding work as a member of Local 117 and his commitment to improving the lives of workers, not only at the DOC but across our union.

As Tracey said, Carl is a "unionist to the core." He has been incredibly active in Olympia, where, on a number of occasions, he has lobbied, testified, and marched around the state capitol, calling on legislators to recognize the brave work performed every day by the men and women of the DOC.

Carl also participates in our union's Steward Advisory Council.  As a member of SAC, he provides input on policy and suggests programs to benefit the membership

Our union is stronger thanks to Carl and we are lucky to have him.  Congratulations, Carl, and thank you for your service!