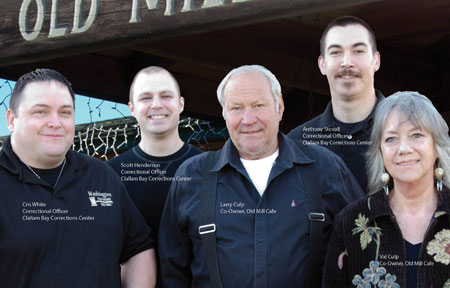 In an effort to fund our DOC contract, Teamsters from the Clallam Bay Corrections Center (CBCC) are doing some incredible work.

Over the last few weeks, members at CBCC have talked with dozens of local, small business owners, and over 50 businesses have pledged their support for getting our DOC contract funded.

"The community has been very supportive."

"The community has been very supportive.  They are glad to sign on and say, 'Let's get your contract funded,'" said Cris White, an officer at CBCC and one of the members who is leading the way to get the word out in the community.

"Normally our jobs aren't really recognized in the public too much, so it's really cool when you hear people saying, 'Hey we really appreciate what you're doing.' It make you feel good," added Anthony Stovall, a Shop Steward at CBCC.

Across the state, small business owners in Spokane, Walla Walla, Vancouver, Sequim, Port Angeles, Monroe, Connell, and the Tri-Cities have signed a letter stating their support of state correctional employees, and they have put window clings up in their storefronts that read:  "State Correctional Employees:  They Protect Us, We Support You!"

Check out this proud owner of Kiwi's Fish & Chips in Sequim: 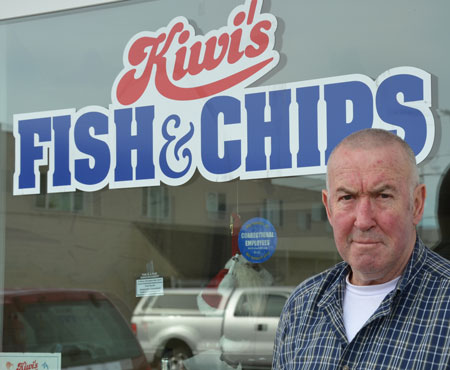 Notice the round window cling to the left of the owner! 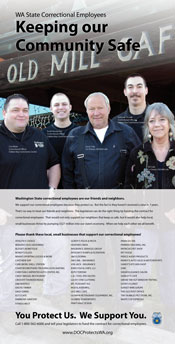 A photo of some of our most active CBCC members alongside the owners of Sequim's Old Mill Cafe was published today in a full-page color ad in the Peninsula Daily News.

The ad lists all of the small businesses in the area that are supporting our effort to win funding for our DOC contract.

Check out a PDF of the ad here.

In addition to talking to small business owners, CBCC members are reaching out to local newspapers.

"I've been out there for 13 years - I've been assaulted.  It's part of the job that we face every day.  You've got to be aware of your surroundings at all times," said White.

"That's stuff we have to be constantly aware of and ready for.  Sometimes one of us gets hurt - if we're lucky, we don't get hurt.  It's part of our job, we understand it. Someone's got to do it," said Stovall.

"It's great to see the community supporting us," he said.

Sign in with or
Don't have an account? Click here to create one.
Please check your e-mail for a link to activate your account.
No recent activity
Peninsula Daily News ad features Teamsters from the Clallam Bay Corrections Center.
CBCC Teamsters Featured in Port Angeles Newspaper
TEAMSTERS POWER