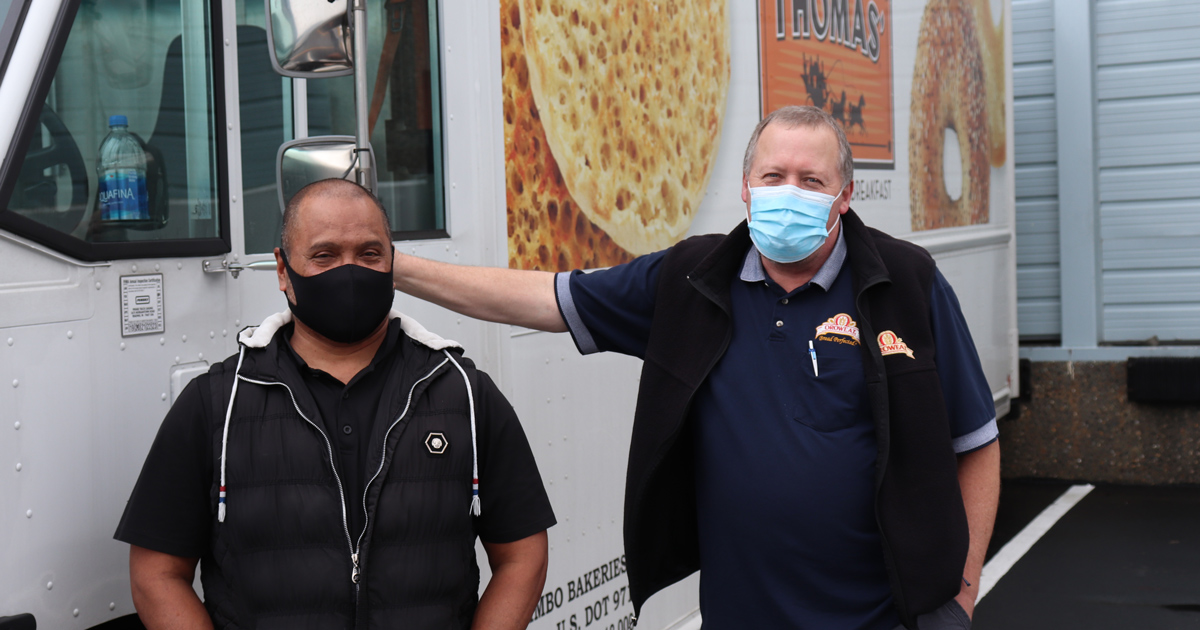 Teamster route sales drivers, Charles Issac (l) and Randy Gniffke (r), have each dedicated over 20 years to the company.

Members from a coalition of Teamster Unions with bakery jurisdictions has voted overwhelmingly to reject the last contract proposal from Bimbo Bakeries and to authorize a strike at the company. Bimbo employees from Teamsters Locals 117, 231, and 252 took the strike vote last week.

Teamster Local Unions in eastern Washington working under a different contract have also voted to authorize a strike at Bimbo.

For over a year the Teamsters coalition has been stonewalled by the company in contract talks. Members have been working without the protections of a labor agreement throughout the pandemic and as far back as September 2019.

Randy Gniffke is a Teamsters 117 Shop Steward and route sales driver who delivers bread, rolls, bagels, and other baked goods to grocery stores in and around Redmond and Issaquah. Gniffke, who has dedicated 21 years to the company, starts his day at 3:00 a.m. stocking his truck with racks of bread, then shuttles his deliveries off to the stores. It's typically 10-12 hours before he's back to the Woodinville depot to empty his truck.

"We take pride in what we do, and we take care of our customers," Gniffke explains. "But we're already working too many hours, and now they want us to work more."

In negotiations, Bimbo has engaged in unlawful regressive bargaining tactics, which has infuriated our Union Negotiation Committee and provoked the membership. They've offered and retracted a significant ratification bonus, proposed dumping extra deliveries on drivers when an employee calls in sick, which would make long days longer, and want to subcontract the bargaining unit work of their merchandisers.

"They dangled a bonus out in front of us," Gniffke said. "Then they tried to attach the bonus to something else. We're frustrated. We're tired of the company's games."

On January 6, the same day as the strike vote, the Union filed an Unfair Labor Practice charge with the National Labor Relations Board alleging bad-faith and regressive bargaining on the part of the company.

The charge lays the foundation for a possible Unfair Labor Practice strike, which would send shock waves to Bimbo customers and disrupt the bakery supply chain across Washington State.

"Teamsters at Bimbo are essential workers maintaining a critical food supply chain during the pandemic," said John Scearcy, Secretary-Treasurer of Teamsters Local 117. "They deserve fair treatment and a contract that honors their labor. A strike is a last resort, but if necessary Teamsters at Bimbo will take action to defend their livelihoods."