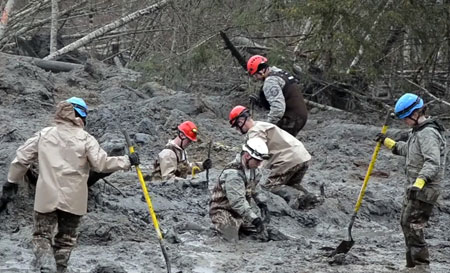 Andrews and his family were on their way to a doctor’s appointment in Seattle when he got news of the slide. “One of my fellow route men called me and asked if I was okay,” he said. Andrews rushed back to the scene after realizing the magnitude of the incident. He was just able to save his livestock before the river flooded his property.

As is the case in any tragedy, there are those who rise to the call of duty. One of them was Local 117 member, Sergeant Jimmy Fletcher.

Sergeant Fletcher, who works at the Monroe Correctional Complex (MCC), volunteered on his day off to help in any way needed. Fletcher wrote about his experience:

“I was able to take part in the search on Friday. I can say this much that seeing the video and pictures on television and the internet do not do the scene any justice. The physical demands were the hardest I have ever been involved with in my life. Just for my team to go a hundred yards probably took us 45 minutes because we were constantly doing self-rescues on our own team mates. A good number of volunteer search teams were off duty first responders such a medics, fire fighters, police, corrections and military. The dedication of the volunteers was very comforting and also because each one was flying some form of insignia from their own department to show support and respect for the families of the victims and of course the victims themselves.”

Another Local 117 volunteer was MCC Officer Tom Gent, who has been working to assure that food donations for animals are distributed to those in need.

Stephanie Shook, a Local 117 Shop Steward at the City of Pacific, was sent to the scene by the City in her capacity as a public information officer.  "There were 211 agencies involved in the relief effort.  The level of care that people have shown in processing the site is unreal.  The heart that these people have shown is incredible - they're not giving up," she said.

Stephanie volunteered to redeploy over the the Easter weekend to help out.

The Red Cross and the United Way of Snohomish County have set up disaster relief funds for the families that have been affected by this tragedy.  The Teamsters 117 Executive Board has approved membership assistance for Mike and his family.

Sign in with or
Don't have an account? Click here to create one.
Please check your e-mail for a link to activate your account.
Teamsters volunteer for Oso disaster relief.
Aramark Member Loses Home in Oso Tragedy
TEAMSTERS POWER