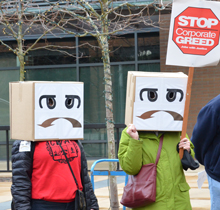 The bad publicity ultimately led to the installation of air conditioning systems in four Amazon warehouses, but not before raising serious concerns about Amazon’s commitment to the health and safety of its workforce.

As it turns out, domestic workers are not the only ones who have a beef with Amazon.  In Germany, workers went on strike again today over a variety of issues, including the company’s refusal to recognize their Union, the misclassification of workers, and the undercutting of industry-standard wages.

Amazon workers from Germany were in Seattle today, taking their fight to company headquarters in South Lake Union, where they spoke out about the state of affairs back home.

"Amazon should treat workers with respect in any country.  Treat workers like humans, not robots,” said Markus Hoffmann-Achenbach, an organizer for Ver.di, the workers’ union.

Members of Teamsters Local 117, along with workers from CWA, UFCW, and SEIU, were on hand to stand in solidarity with their union brothers and sisters in Germany.

German workers at Amazon have been engaged in rolling strikes since last June.