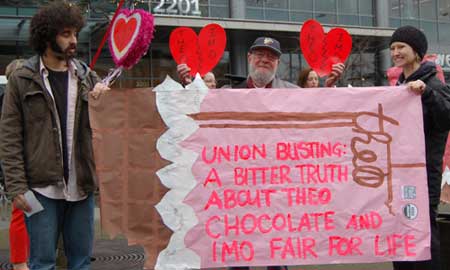 The "fair" in fair trade has a shallow meaning when it comes to Theo Chocolate, a Seattle-based chocolatier, that despite its "fair trade" certification, engaged in a vicious anti-union campaign during a Local 117 organizing drive in 2010.

Once it heard that a majority of its workers wanted to join the Teamsters, Theo hired a union-busting consulting firm, terminated a union leader, held workers in captive audience meetings that lasted up to four hours, and said that they would rather shut down the Fremont-neighborhood factory than sign a union contract.

Typical stuff from a company without a conscience, but from "fair trade" Theo's?

Yesterday, on Valentine's Day, ex-Theo workers, together with union members and fair trade activists, gathered in front of the Westlake Whole Foods to raise awareness about Theo's efforts break the union.

The group handed out genuine fair trade chocolates from a heart-shaped piñata and leaflets with a simple message: union busting is disgusting, whether it's coming from a billion dollar Koch brothers-funded corporation or from a local organic boutique chocolate maker.

The action coincides with a report by the International Labor Rights Forum (ILRF), Aiding and Abetting, that denounces both Theo for squashing the union and the IMO, the swiss-based group that certifies companies that uphold fair trade standards. Somehow the IMO branded Theo with Fair for Life certification even after being informed by Theo workers that the company was violating international labor standards.

"Theo and the IMO need to be held accountable," said MacKenzie Jahnke, a union supporter at Theo who was fired by the company shortly after having received positive evaluations of her work.

For more on this story, see David Goldstein's blog post in the Stranger.