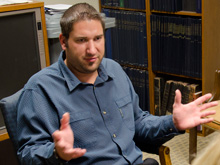 "It's a great place to live," says Ken, who works as an electrical supervisor in the prison's Special Offender Unit. "I just want to see Sultan keep moving forward."

Part of moving the City forward means fighting to save jobs.  "My opponent wants to outsource the City's garbage hauling. I think that's a bad idea - we would have to cut union jobs," he says.

With the help of the Teamsters, Ken plans on turning out the vote this fall among Sultan's approximately 4500 residents.

Sign in with or
Don't have an account? Click here to create one.
Please check your e-mail for a link to activate your account.
No recent activity
Another Teamster Candidate Running for Office
Sultan City Teamster is Off and Running
TEAMSTERS POWER