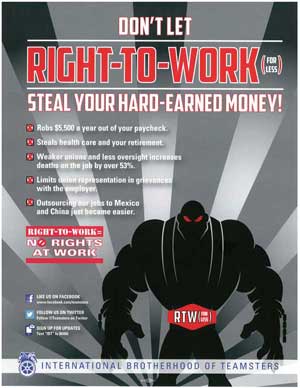 Thankfully, the bill died last session in Olympia, but the future for workers in Washington State remains uncertain.

If the political landscape were to shift slightly, the same assaults on workers' rights that caused massive protests of working people and their unions in Wisconsin and elsewhere will take place right here in our own backyard.

Don't be fooled - right-to-work is mandated union-busting, pure and simple. Workers living in right-to-work states earn about $1,500 less per year than workers in states without these laws.

Workers in right-to-work states are also less likely to have health insurance.

So don't let right-to-work take a foothold in our state.  Spread the word!

Sign in with or
Don't have an account? Click here to create one.
Please check your e-mail for a link to activate your account.
No recent activity
Right to Work is Bad for Workers
"Right to Work" (FOR LESS) is Wrong for Workers
TEAMSTERS POWER