As your JLMIC Co-Chair, I want to give you an update on the status of your King County health and welfare benefits:

The JLMIC Protected Fund Reserve Is Strong And Continues To Grow, Ensuring Preservation Of Plan Provisions And No Premium Share In 2017-2018.

The Protected Fund Reserve was established in 2013 to create a bulwark against the ever-increasing costs of medical care so as to defer any need for employee premium share towards the excellent, full-family medical, dental, vision and ancillary benefits provided through King County employment and negotiated by our Union at the JLMIC.

Shop Steward Cynthia Adams (bottom right) shares ideas with her co-workers as a part of our Every Voice Counts project.

The King Street Center was buzzing yesterday, as Teamsters at King County met to share ideas and voice their concerns about the workplace as a part of our Every Voice Counts project.

Members grabbed lunch, then sat together in small groups to exchange ideas. Many issues were brought to the table, including the need for the County to recognize longevity, provide equitable wages and benefits, and limit the number of temps.

Our goal with this project is for member leaders to listen to their co-workers about how to build a better workplace and a stronger union. So far, dozens of King County Teamsters have participated in the project.

"It's important to have union representation because of the political environment we're facing," said Lisa Longdon, a Shop Steward from the King County Professional and Technical group. "There needs to be a voice for the people, which is the union."

We will be continuing to organize lunchtime events at King County for the next several months. If you would like to schedule your Every Voice Counts interview, talk to your Shop Steward, your Business Rep. Suzette Dickerson, or contact Karen Estevenin at 206-441-4860 ext. 1244.

On Monday, April 25, our King County Coalition of Unions bargaining team met with the employer to continue total compensation contract negotiations for the 2017-2018 biennium.

As expected, the County presented a comprehensive economic proposal that responded to our call for across-the-board wage increases, proposed increases to the County’s contribution for health and welfare, and our proposal to address longevity and the current merit-based pay plan.

The employer also came to the table with a proposal for common language issues in what they called a “joint labor” agreement. That presentation was not received well by the Union committee. The committee felt that the employer’s proposal was seeking to erode hard-won language issues that in many cases are unique to specific bargaining units. The Union group unanimously and categorically rejected that proposal. 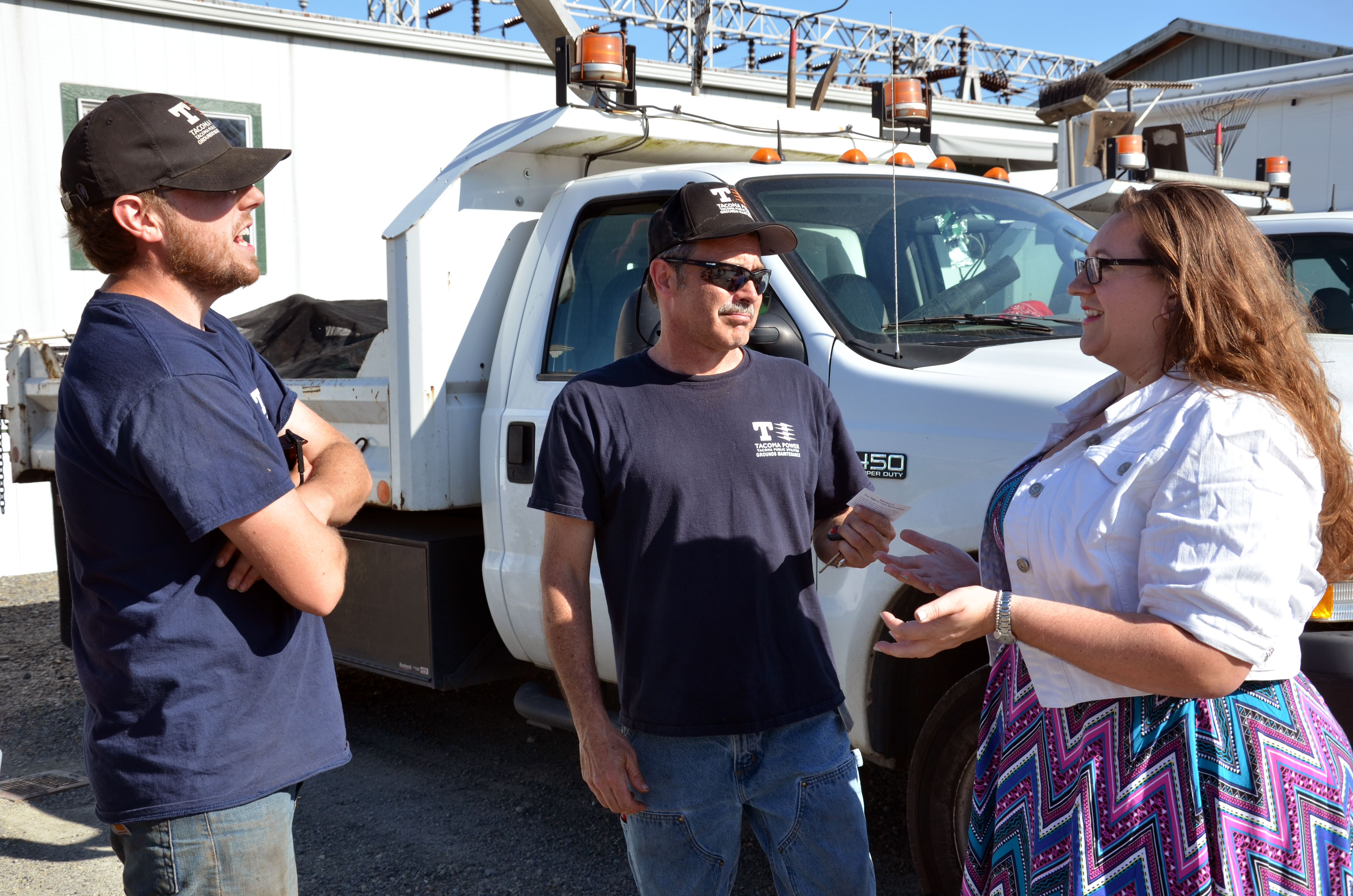 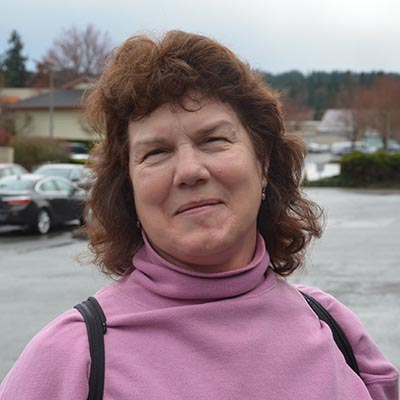 It's time to bid farewell to 28-year Teamster, Evie Shannon. Evie has been a Teamster Business Representative for ten years, first at Local 763, and at Local 117 since 2011. Her last day at the Local will be on April 30.

Most recently, Evie represented members in various jurisdictions in King County and the North Sound region.

Evie has always been a fierce advocate for her members and for equality and fairness in the workplace. Recently, we sat down with her to discuss her long, stellar Teamster career.

Q: How long have you been a Teamster?

E: I started driving a school bus for the Lake Washington School District in 1988. That was my first union job. I was in my 30’s and had two kids. I worked there for 18 years.

Q: How did you get involved in the union?

I saw a posting for a union meeting. I knew I had to go. I grew up in a family that was very opinionated. At the dinner table, there was always a debate. My parents always told me to have an opinion and not to be afraid to voice it. 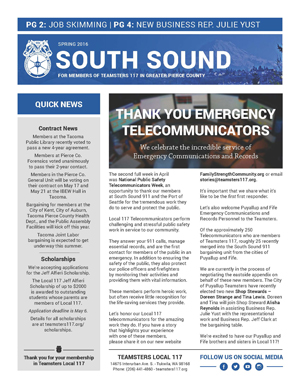 The new issue of your Teamsters South Sound newsletter is now available!

In this issue, we highlight the important public safety work of our emergency telecommunicators as well as the bio of the new Business Rep for South Sounders, Julie Yust. The column from John Scearcy, your Local 117 Secretary-Treasurer, explores the dangers of skimming, which is common in the public sector work environment.

You can view a PDF of the newsletter here. For print copies, please contact your Business Representative.

King County Total Comp Bargaining is Down to the Economics 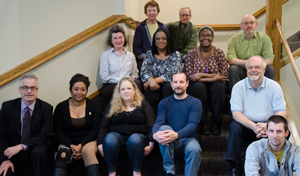 Right now, Local 117 members who serve on the bargaining committee of the King County Coalition of Unions are gathering to continue total compensation contract negotiations for the 2017-2018 biennium. Today’s bargaining session will kick off at 9 A.M. and is expected to last most of the day.

We are several months into the process, so negotiations are focusing almost exclusively on the most important economic issues. The County and the Coalition of Unions exchanged initial proposals over all economic elements of your contract and we anticipate that, in today’s negotiations, the employer will present a comprehensive counterproposal to our initial proposal.

The County will likely respond to our call for a general across-the-board wage increase each year of the two year contract, as well as increased contributions for medical benefits that avoids any employee premium share, and the creation of additional steps to the pay structure that would acknowledge the importance of longevity. 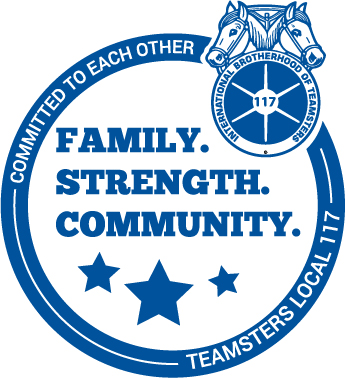 On Thursday, April 28, we will be conducting drop-in interviews for all King County Teamsters at the King Street building as a part of our Every Voice Counts campaign.

This is your opportunity to share ideas with your co-workers and voice your concerns about your workplace.

We will be meeting in the North/South Wind Conference Room from 11:30 am to 1:00 pm on April 28.  Your interview will take about 20 minutes. Light snacks and refreshments will be provided.  Can you make it?

Our goal is to connect with every Teamster member at King County and engage more members in their union.  Member involvement is key to a strong union and a better workplace.

You can learn more about our Every Voice Counts campaign and read member stories on our new campaign website at FamilyStrengthCommunity.org.

You can RSVP for your interview here. If you have any questions, please let me know.

Thanks and hope to see you on April 28!

TUKWILA — Today the U.S. Supreme Court delivered a victory to working people in its decision in Friedrichs v. California Teachers Association. The court’s 4-4 decision leaves intact the precedent set by Abood v. Detroit Board of Education that has served as law for four decades.

“Today’s ruling affirms 40 years of precedent that working people have the right to a strong and effective union. Union rights are fundamental to an economy that works for all Americans. The Supreme Court rejected a political scheme to silence working people,” said John Scearcy, Secretary-Treasurer of Teamsters Local 117.

The Friedrichs case challenged the constitutionality of fair-share fees. These are the fees paid by non-union members who share the wages, benefits and working conditions collectively bargained for them by their union. The fees are used to cover the cost of bargaining and do not go towards political activity.

I wanted to pass along the following update from the chairs of the total comp bargaining committee that was distributed yesterday:

At the 02/17 Total Compensation Master Committee meeting, Labor and Management continued discussion on conceptual framework for health benefits moving forward. Details need to still be worked out, and more information is forthcoming.

Thank you for all that you do. The next negotiations session will take place on March 2 at the Teamsters Hall.