At WCCW, everyone knows about hot dog Friday. Every Friday a 30-year DOC vet named Henry Torres brings in tortillas, buns, 60-70 franks, and the “best damn salsa in the world.” 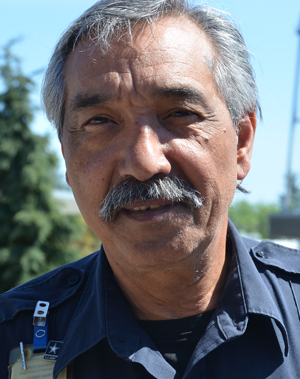 At WCCW, everybody knows about hot dog Friday. Every Friday, a 30-year DOC vet named Henry Torres brings in tortillas, buns, 60-70 franks, and the “best damn salsa in the world.”

He cooks for everyone on staff, all the way up to the superintendent. Sometimes he likes to embellish, bring in pork shoulder for variety. And to top it off, he pays for everything out of his own pocket.

“He’s one of the wisest guys here – a leader at this institution,” said longtime Shop Steward, Sgt. Michael Delgado.

Henry has had an epic career in public service. He was drafted into the Army in 1966, served two tours of duty in Vietnam, one in Granada, and one in Panama.

All told, he served 22 years in the military. Add that to his three decades as a corrections officer and that’s quite a remarkable run.

In his spare time, Henry, aka Officer Torres, looks after his four grandchildren and volunteers in the Watchdog program at an elementary school in Lacy. He mentors kids and educates them on the dangers of bullying.

At WCCW, Henry is an institution unto himself, the embodiment of a true unionist. He is a wealth of knowledge, experience and compassion. He looks after his co-workers, making sure that everyone is safe and that, on Fridays, their stomachs are full.

Thank you for your service, Henry. We salute you.