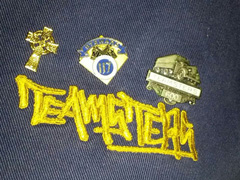 Tim got interested in graffiti years ago. He came out of LA’s punk scene in the late 70’s and early 80’s, when punk aficionados started tagging LA buildings with their favorite bands.

In 1987, he started the influential graffiti art magazine, Can Control, which he continues to run today. A few years later, he launched a website under the same name.

According to the Can Control website, “each issue is full of the best graffiti art from that moment and the kings before.”

Tim is a also a graphic communications whiz, and he shares his talents by frequently sending in artwork he has designed for Local 117 flyers, buttons, stickers, and pins.

Tim is acutely aware of the constant attacks on working people and the need to fight back.

“The Union helps put food on our tables, it supports our medical, and it allows us to support our children,” he said.

“Anyone who’s got a skill set of any kind should get involved.”