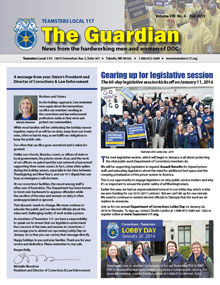 In this issue, you'll find an announcement about our Teamsters DOC Lobby Day on January 26 as well as an overview of our 2016 legislative agenda.

You can access your Guardian newsletter online here. Print copies will be available at our DOC Holiday Membership Meetings and from your Shop Steward and Business Representatives starting in the next couple of weeks.