Todd started writing fiction years ago; all aspects of his life are infused in his work. 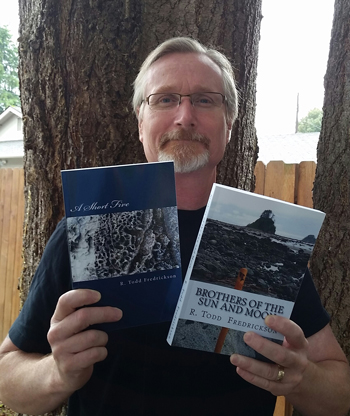 Todd Fredrickson displays his novel and book of short stories.

There are many facets to Todd Fredrickson. Todd is a Correctional Sergeant at the Monroe Correctional Complex, where he tracks over 14,000 tools at the prison. He is a veteran of the 82nd Airborne Division of the US Army, an avid hiker, and a Native American history buff. He is also a budding novelist.

Todd started writing fiction years ago; all aspects of his life are infused in his work. “Every character contains pieces of people I know,” he says. “With the character in Brothers, you can see my experience in corrections for the last 27 years.”

Brothers of the Sun and Moon is Todd’s first novel. The tale is set against the rich cultural backdrop of the Makah and Quinault Indian Tribes on the Northwest coast. It tells the story of Sara Todd, a correctional investigator, who teams up with the Clallam Sheriff’s Office and the tribal leadership to search for her missing husband.

For Todd, it’s a story that has been brewing for a long time. He pounded out a partial draft years ago on a Smith Corona typewriter. He later transferred his work to an old computer, but lost it when the machine crashed, and had to salvage the typewritten pages.

The process for writing the book was an adventure in itself. “I had a synopsis in my head, but with each chapter I didn’t know how it would end up,” he said. That process led to some unpredictability and a surprising outcome.

To research the book, Todd has spent each May backpacking with his wife on the coast to Cape Alava. Here, there are petroglyphs, carved into the rocks by ancestors of the Makah tribe. In the nearby town of Neah Bay, a cultural center chronicles the living history of the Makah people.

Todd has also published, A Short Five, a collection of short fiction. Many of the stories in the book are set in the region where he grew up, in and around Snohomish County.

As for Brothers, Todd is not quite finished with the story. He’s brought the characters back to life for White Salmon, a sequel set in the town by the same name down on the Columbia River. “It’s been fun to do,” he says. “I feel like with each new chapter I could start a whole new book.”

If you’d like to order Todd’s novel or collection of stories, they are available here.