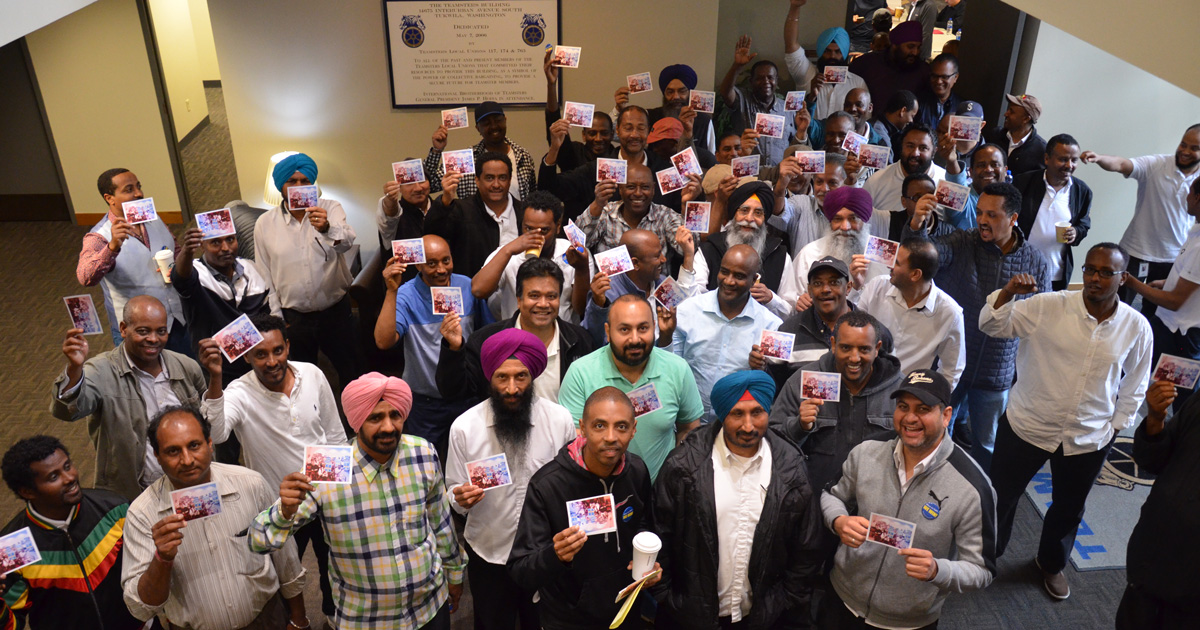 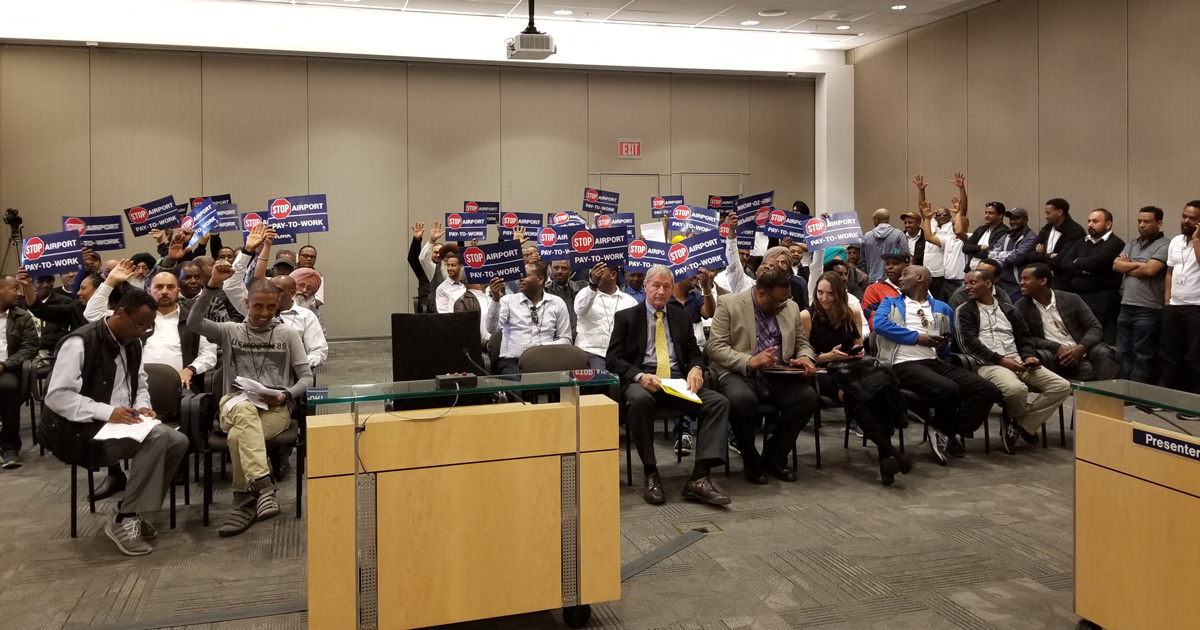 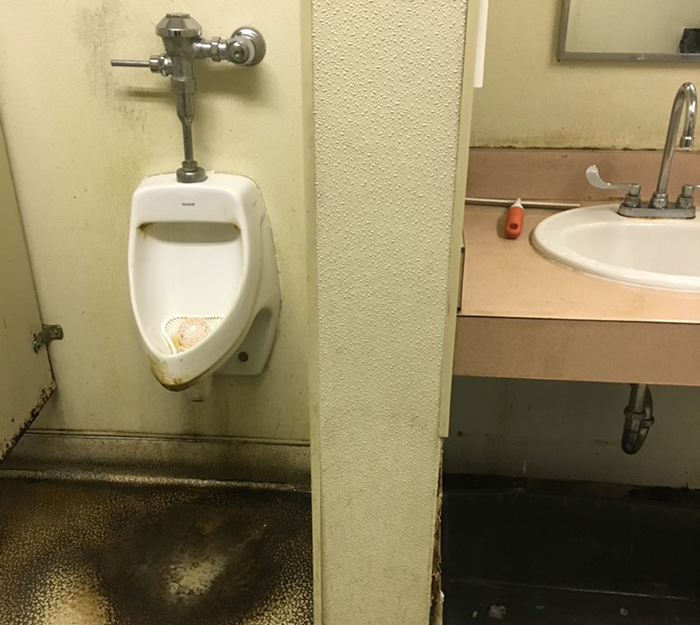 Taxi drivers are being fined $100 for speaking out about the disgusting state of Port bathrooms.

The Port of Seattle has stooped to a new low. The Port has issued $100 citations to taxi drivers who participated in peaceful demonstrations in August over the deplorable state of Port bathrooms for drivers, among other issues.

By protesting publicly, drivers finally compelled the Port to acknowledge the problem and take action to fix it. Previous efforts by the drivers to raise the bathroom issue with Port officials had fallen on deaf ears.

The Port has approved funding for the design and construction of the new bathrooms, but apparently the drivers who exercised their right to speak out on horrendous state of the old bathrooms will be picking up part of the tab.

Drivers have five days to pay the $100 or face suspension and additional citations from the Port. Some drivers have reportedly appealed the citations, only to have their appeals denied. 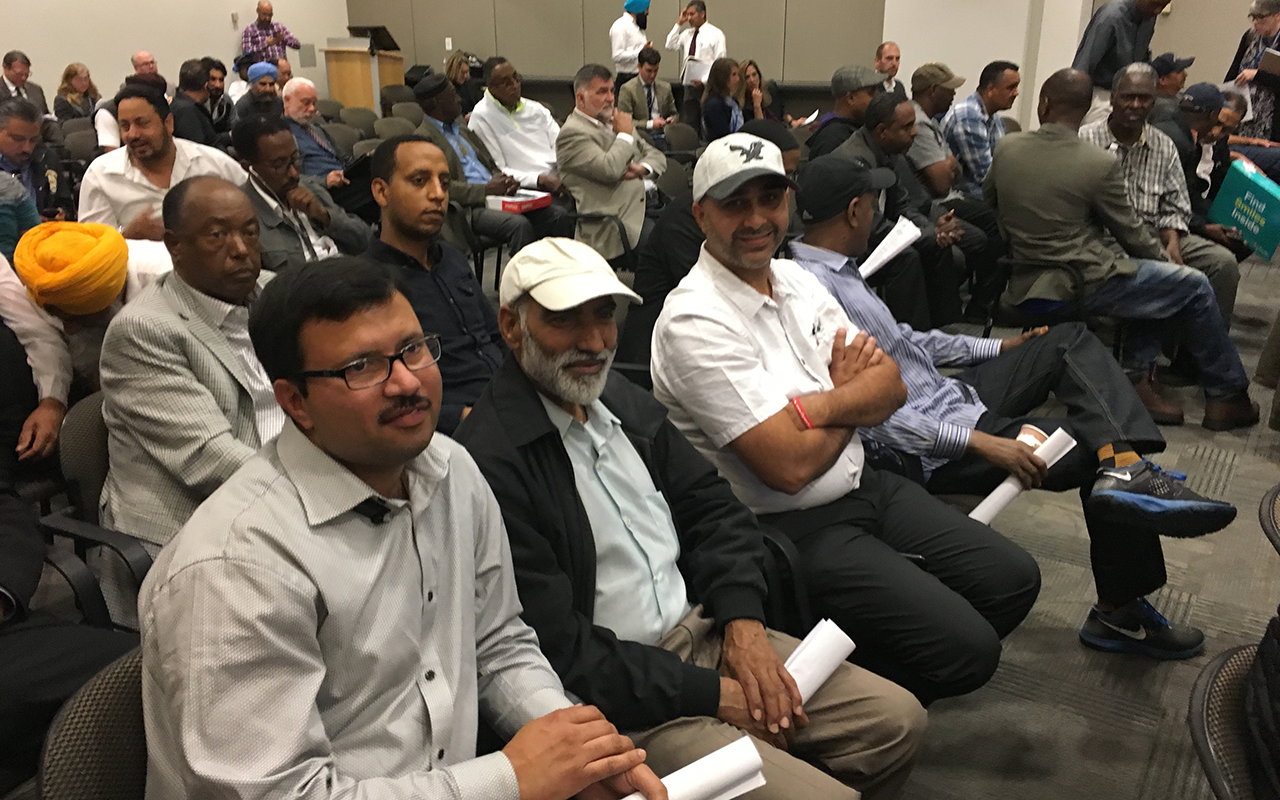 Drivers have been forking over $7.00 to Eastside For Hire, the company that holds the Airport taxi contract, every time they pick up a passenger at the Airport. That amount was set to increase by $.50 at the beginning of October.

But after months of pressure from drivers and the community to improve conditions at the Airport, the Port stepped in to stop the increase and acted instead to decrease that amount to $6 per trip.

Drivers say it’s too little to make a difference. “Thank you for the reduction, but this does not solve the problem,” said Ali Sugule, who has been driving at the Airport for two years. “We need a voice at the negotiations table. We don’t want this contract going forward because it is hurting us.”

Airport taxi drivers have been calling out Eastside for months for multiple violations of its contract with the Port and point to a rigged system that enriches both Eastside and the Port at their expense.

Taxi Drivers at SeaTac Airport Strike for a Second Day 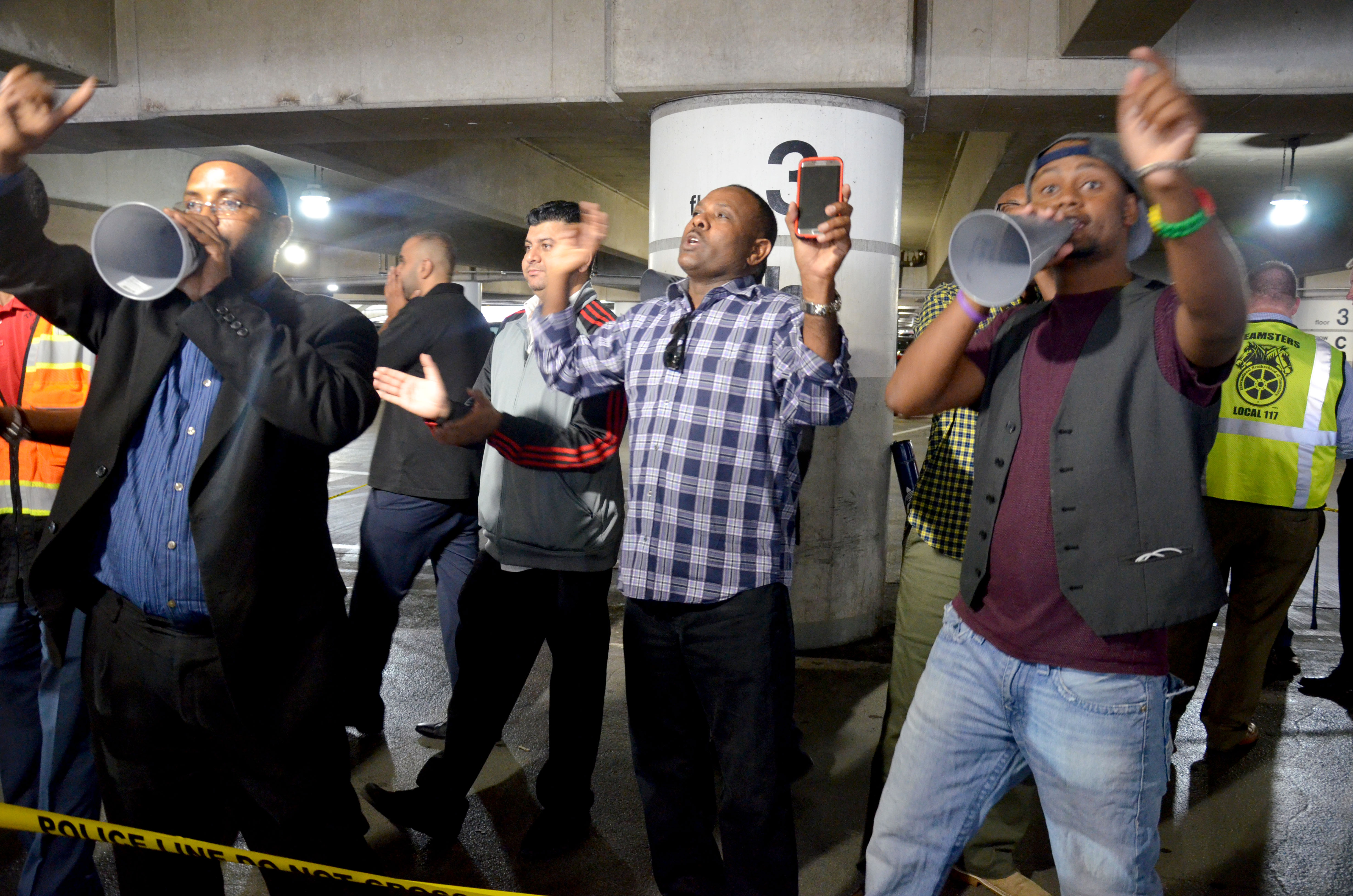 “Unfair!” “Justice!” Loud voices of taxi drivers resonated across the parking garage at SeaTac Airport yesterday. East Side for Hire management stared in bitter frustration at drivers who exercised their right to collectively voice their issues with their dispatch company and the Port of Seattle who contracts with Eastside by suspending work for an hour. It was their second day demonstrating against inhumane working conditions and unjust retaliation by the company. Eastside for Hire has failed to reinstate the 18 drivers who were unjustly suspended for participating in a demonstration on August 21rst. 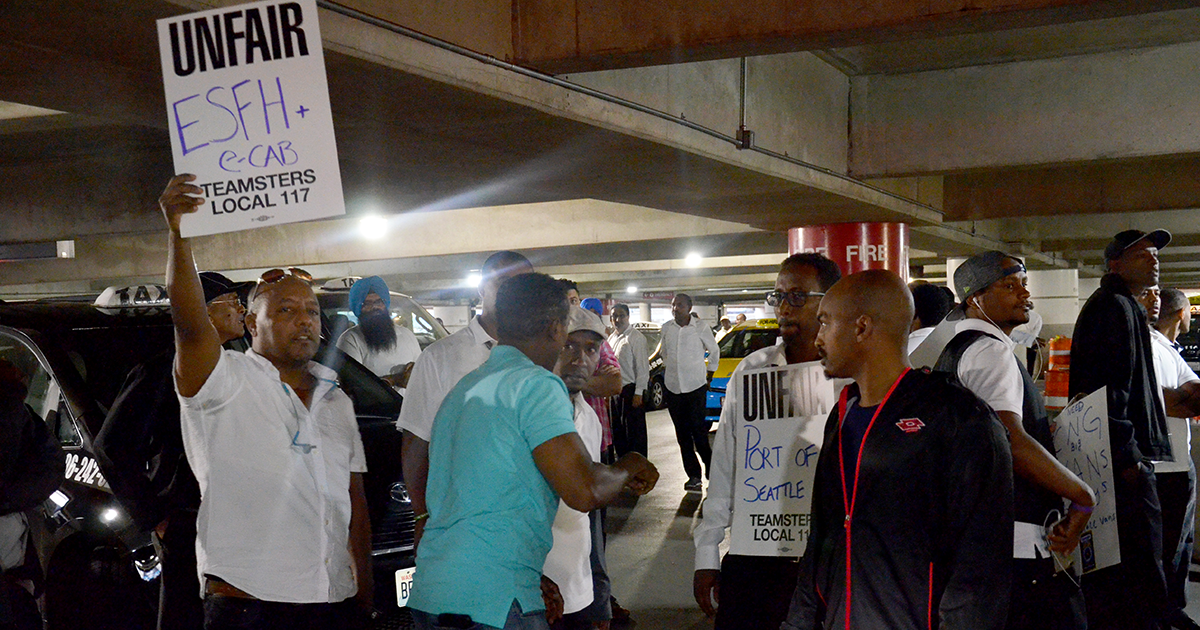 At approximately 9:30 a.m., drivers in the airport taxi lot got out of their cabs, raised signs, and began chanting, “Unfair, unfair!” Cab service for arriving passengers slowed to a trickle.

"I have to fight for my freedom."

“I work 16 hours to try to pay my bills. When I got home yesterday, I almost fell down,” said Alamu Tegegn. “I said to myself, ‘If I continue like this, I will die.’ So I have to fight for my freedom.”

The strike represented the culmination of months of frustration over humiliating working conditions and the unjust termination of union supporter, Ali Sugule.

On August 8, Sugule had criticized the airport dispatch company, Eastside For Hire, in public testimony at a Port Commission meeting. His dispatch services were revoked later that week. 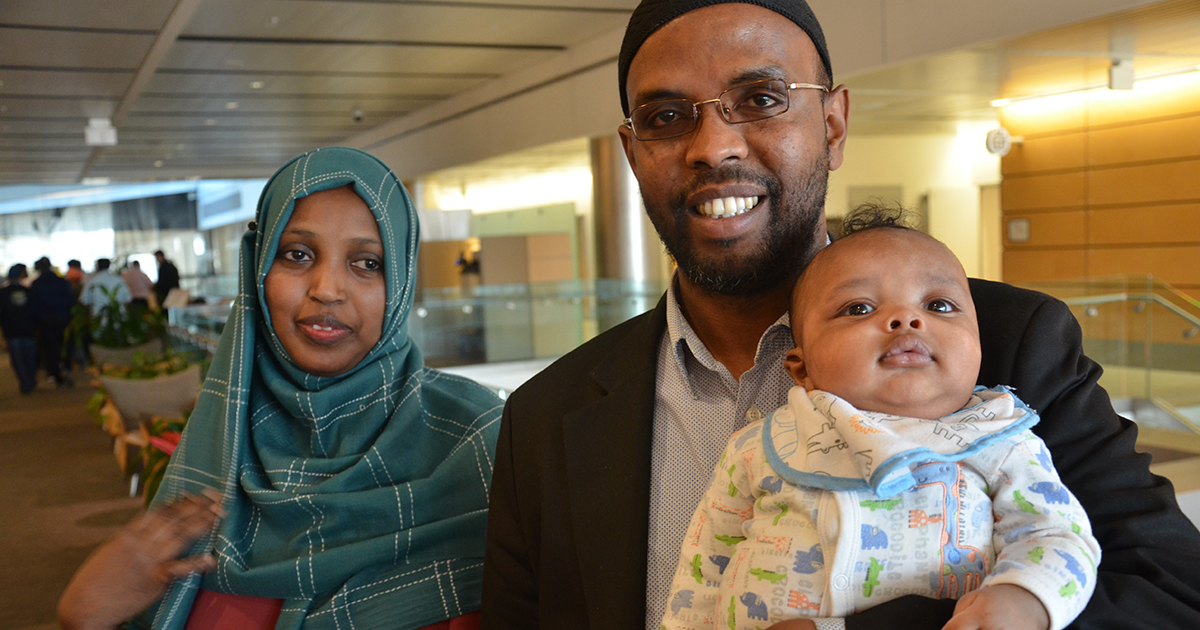 Teamster driver Ali Sugule with his family. Sugule is fighting for his job after Eastside For Hire revoked his access to dispatch.

Port of Seattle commissioners spent the better part of their two and a half hour special meeting yesterday discussing a range of issues, including airport expansion and biofuel production, but when it came to taking public comment from drivers who are being exploited at the Port’s expense, they cut matters short.

The reason? They had a luncheon to attend.

“We have a hard stop on this meeting at 11:14,” said Commission President Tom Albro at precisely 11:07 A.M. That gave the public all of seven minutes to testify on critical issues impacting airport workers and the community.

A dozen or so Teamster drivers had been waiting more than two hours to speak out on a range of injustices at the airport.  The drivers had taken precious time away from their workday to express their concerns, but had to leave without testifying when the Commission unexpectedly shut down the meeting. 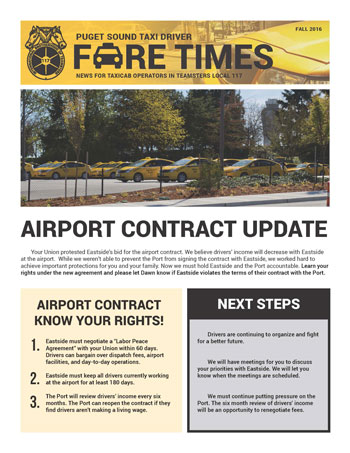 The fall issue of our Fare Times newsletter is now available. The Fare Times provides news and information for Teamster taxicab operators.

In this issue, we have an update on the airport contract that the Port signed with Eastside For Hire this month.

We believe that drivers' income will decrease under the new contract. Although we weren't able to prevent the Port from signing it, we were able to achieve important protections for drivers and their families.

One of the requirements under the contract is that Eastside must sign a "Labor Peace" agreement with the drivers' Union within 60 days.

We will be scheduling demands meetings soon so that drivers can talk about their priorities for the agreement.  We'll let you know once those meetings have been scheduled.

From the American Prospect: Teamsters Take on Uber

If you want an excellent primer on our fight to organize and improve working conditions for Seattle-area for-hire drivers, look no further than this article that was published today in the American Prospect.

It's quite an extraordinary piece and call our Union - Teamsters 117 - the "spearhead of the battle" to create a more equitable city for all Seattle residents, not just the wealthy few.

It's long, but definitely a worthwhile read.

Metropolitan Seattle is two worlds. The city’s center is a gleaming fantasyland, with cruise ships on the bay, yellow construction cranes looming above the office towers, one-of-a-kind boutiques and ubiquitous coffee shops and bakeries. On the periphery sprawls a working-class world packed with immigrant-owned mom-and-pop shops and strip malls featuring chain drug stores and payday loan dealers. Connecting the two worlds is a service sector, where sales clerks, baristas, and taxi drivers meet the needs of techies and hipsters. What’s unique to Seattle is a progressive movement trying to bridge the two worlds to create a sustainable economy, with good jobs and efficient public services. Four big unions are at the center of the battle, but they’ve brought allies with them: environmentalists, faith leaders, NGOs, and above all, the organizations of the myriad immigrant populations of Sikhs, Somalis, Ethiopians, Kenyans, Vietnamese, Chinese, Pakistanis, and Mexicans. MORE 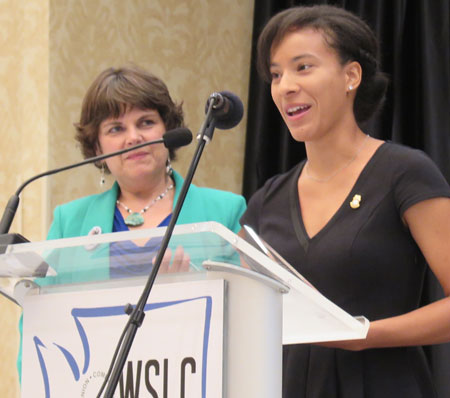 Local 117 Business Representative Dawn Gearhart was recognized at the Washington State Labor Council (WSLC) convention in SeaTac today with the 2015 Elsie Schrader Award for the advancement of women in leadership roles and activism on behalf of women within the labor movement.

Over the last three years, Gearhart has demonstrated outstanding leadership in her work organizing and representing Seattle-area taxicab operators and members of the Western Washington Taxicab Operators' Association.

Last year, she helped successfully negotiate an agreement with the City of Seattle that created more taxi stands, more taxi licenses, a fund to offset higher operating costs for wheelchair accessible cabs, and medallions as a property right for taxi owners.