The Senate budget proposal that was released last week takes aim at our collective bargaining rights.

For the first time since negotiations began, Senate lawmakers have included funding for our DOC contract in their budget. This is good news and a signal that our phone calls, emails, and small business campaign are making a difference.

But here’s the caveat: The Senate wants to make the funding contingent on the passage of SB 6126, a bill that would weaken our collective bargaining rights by turning the process into a public spectacle.  The bill contains provisions that could not pass during the normal legislative session.

Changing the conversation in Olympia

We’ve changed the conversation in Olympia, but there is still work to be done.

The legislature is now in special session because they’ve been unable to reach agreement on a new two-year budget. The biggest sticking point between the House and Senate budgets has been over compensation for state employees. Both sides recognize that in order for a deal to get done, they’re going to have to fund the contracts. 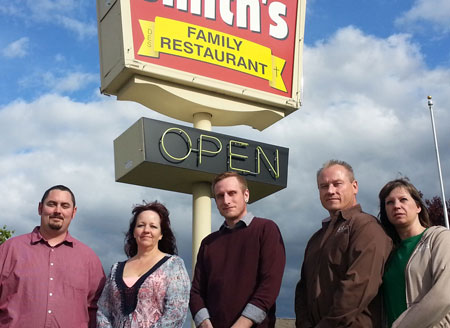 Small businesses across the state are showing their support for DOC correctional employees.

In Walla Walla, 32 businesses have signed a letter saying that they stand with correctional employees who are trying to get their contract funded.  The businesses are also displaying window clings in their store fronts that say:  "WA State Correctional Employees:  You Protect Us.  We Support You."

We learned this afternoon that Governor Jay Inslee has called a special session of the legislature scheduled to begin on Wednesday, April 29.

A special session could cost taxpayers hundreds of thousands of dollars, but thanks to a minority of obstructionists in the Senate, Inslee is left with little choice.

The state budget in one simple chart

As of today, the Senate and House have both approved separate versions of the 2015-2017 state operating budget. This means leadership from both the House and Senate will now sit down with the Governor and negotiate a final agreement that attempts to reconcile these separate proposals.

This chart illustrates how each budget addresses important issues for DOC members:

Are you ready to take the next step toward getting our contract funded?

I wanted to thank all Teamsters for the work you have been doing toward getting our Department of Corrections contract funded. Your phone calls and emails to legislators in support of correctional employees is making a huge difference.

I also wanted to ask your help. We need to send letters to the editors of local newspapers across the state calling on the legislature to fund our contract. Legislators will see those letters as a reflection of the mood in the community and pay attention.

Good News From Olympia for DOC!

The good news out of Olympia today is that the State House Committee that writes the budget included funding for our Department of Corrections contract in their proposal.  The budget will still need to be voted on by the full committee and then the full House of Representatives, but it's a positive step forward in the process.

What this shows is that all of your work - your visits with legislators, your phone calls, your emails, and all the outreach with the community is making a difference.

Just as one example, a group of members from Clallam Bay Corrections Center have already gotten 25 small businesses to fill out a form showing their support for our contract.

That's why we are winning in Olympia.

The Latest from Leg. Session - Report from Olympia #2 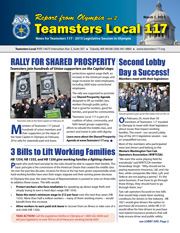 It's been a busy legislative session in Olympia and Teamsters 117 has been in the thick of it, advocating for public policies that are good for workers, good for families, and good for communities.

You can read about some of our work, including recent lobbying efforts, testimony from legislative hearings, and important bills we are tracking, in our Report from Olympia #2.

PSERS Bill Moves on to the House Rules Committee

Good news from Olympia!  Our PSERS bill (HB 1718), which would expand the Public Safety Employees' Retirement System to include DOC nurses, passed out of the House Appropriations Committee last night and has moved on to Rules.

This is an important step for the bill because it means that any day now the bill can be pulled from Rules for a final vote on the House floor.

Yesterday, over 50 Teamsters traveled to Olympia to meet with their legislators about issues that impact working families. The event - our second Lobby Day of the 2015 legislative session - was an unqualified success.

Most of the members who participated were Teamster taxi drivers, who belong to the Western Washington Taxicab Operators Association (WWTCOA).