Our Local 117 public services campaign highlighted at the convention 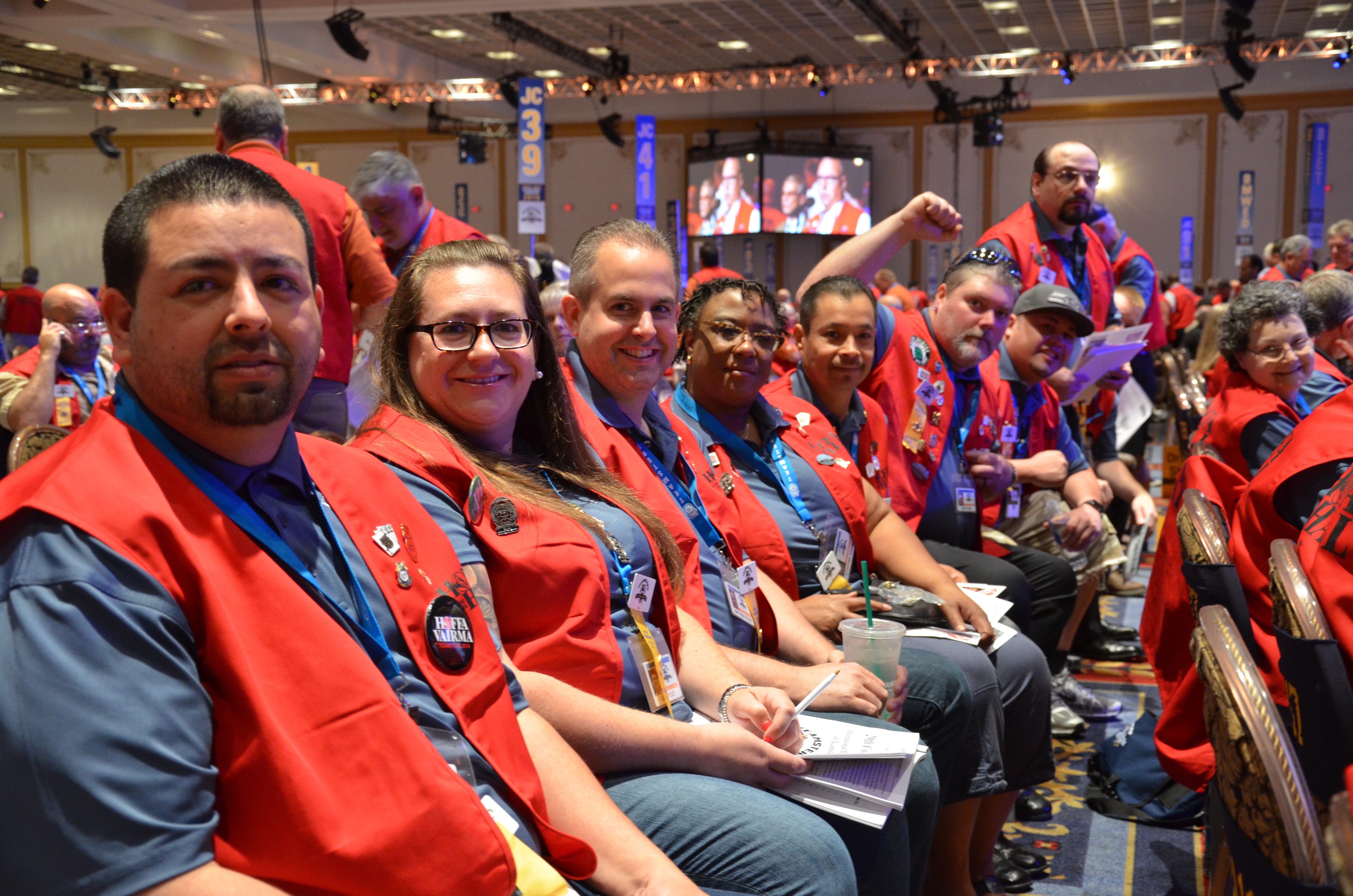 At the convention, division meetings take place covering all aspects of the work of our Union. IBT staff, Local Union staff and members discuss the successes and challenges that our Union has experienced.

At the Public Services Division meeting, we talked about the attack on public employees, the legal challenges to collective bargaining rights, and the need to retain a strong voice in the workplace.

One of the topics discussed was the U.S. Supreme Court case Friedrichs vs. California Teachers Association. This was the case that threatened to weaken the collective bargaining rights of public sector union members.

The Supreme Court deadlocked on Friedrichs, essentially maintaining our collective bargaining rights. Sadly, there are more than two dozen cases working their way through the courts that would have the same impact.

Division Director Michael Filler spoke of the need to fully engage our membership. To build solidarity and fend off these attacks, we must find ways for members take a greater role in their union.

Our Union Coalition bargaining team spent most of the day in caucus on Wednesday, June 22, first reviewing the possible economic parameters including wage increases, a coalition premium, and health and welfare benefit protection.

Our Union team also reviewed language that represented possible revisions to a Joint Labor Agreement (JLA) that culled out provisions and language unacceptable to the Union Coalition.

We then had a robust and serious dialogue regarding the JLA. The JLA was not originally contemplated by the Total Compensation Agreement that led to these negotiations, and the concept of the JLA was introduced very late in the process and without a clear and reasonable explanation as to how the JLA (and agreement of common terms applicable to all coalition unions) would integrate with the multiple, mature collective bargaining agreements that have been negotiated across decades.

We put aside our differences with King County for a day as union representatives and County officials gathered at the Labor Temple for the annual King County Labor Summit.

The purpose of the Summit was to seek common ground and explore opportunities for partnerships between unions and the County around issues like equity, social justice, and training and development. Much of the day’s discussion also revolved around the need to address the County’s financial challenges.

Our Local Union was a major player at the event. John Scearcy, our Secretary-Treasurer, initiated the opening panel discussion about the need to prioritize training opportunities for union members at the County.

John told his powerful personal story about how he rose up out of poverty to get a good union job in a warehouse, become a Shop Steward, and ultimately the President and Secretary-Treasurer of Teamsters Local 117. “We need to create more opportunities for impoverished communities and people of color,” Scearcy said. “This is about partnering toward people’s success.”

Local 117 Secretary-Treasurer, John Scearcy, has published a guest opinion piece speaking up on behalf of professional staff working at the City of Black Diamond. See below:

Voters elect their public officials to facilitate the work of local government. In Black Diamond, the majority of the council is doing just the opposite.

At every step of the way, it appears that the council is trying to disrupt, derail, and delay the work of the city. The impact has been disastrous.

The city’s bills have gone unpaid, building inspections have been placed on hold, and the advice of the city attorney and city insurers has been ignored.

The council is ostensibly trying to thwart a previously approved development project. But city residents are paying the price for the council’s abdication of responsibility and interference with the provision of essential services.

When the council refuses to approve gas for police vehicles and 911 emergency services, it is recklessly using public safety as a political tool to further its own agenda.

The council’s antics have led to the loss of grant money to update the city’s stormwater capacity and to make required improvements to the city’s street lights. Taxpayers will have to make up the difference or forego the important enhancements.

The city went for three months without a building inspector. If residents wanted to move forward with building a deck or repairing an existing structure, they had to wait. By refusing to hire an inspector, the council impeded an important construction project at a local elementary school.

The council’s shenanigans are getting the city into legal trouble. By failing to show up to council meetings and trying to circumvent the state’s open meeting laws, councilmembers are putting the city at risk of a costly lawsuit. If that happens, the public will once again have to pick up the tab.

The city’s hardworking staff is bearing the brunt of the chaos. They have been unjustly harangued by councilmembers in the press and compelled to attend meetings beyond their normal working hours.

The staff at the city are experienced professionals. They know their role is not to take a position on the development controversy; they are simply trying to conduct the business of the city to benefit the residents of the community.

They want to see to it that the city’s bills get paid on time, that schools and street lights are improved, and that the city is fulfilling its legal and financial obligations.

In short, they are just trying to do their jobs. It is now incumbent on the council to stop interfering with their work so that they can go about the business of serving the residents of the local community.

This piece was published in the Enumclaw Courier-Herald on June 15, 2016. You can view the piece in the paper's Green Edition here.

Our Coalition bargaining team met with King County for a frustrating negotiations session on Wednesday, June 8. In this session, the County appeared unwilling to meet our team halfway on issues that are critical to the union coalition.

The day started with the County stating its opposition to our proposal for a longevity or merit-based pay structure that would reward union members who have dedicated many years of service to the County. This came as a disappointment to our union committee given that establishing a system for longevity pay was one of our priorities going into bargaining.

We were more hopeful when the County indicated that it was interested in creating a premium for members whose unions have participated in coalition bargaining. We took that idea into caucus and discussed the possible makeup of the premium through the creation of a new coalition pay table that would surpass the general squared pay table.

By Leonard Smith, Director of Organizing and Strategic Campaigns

A case argued before the U.S. Supreme Court this year had the potential to significantly weaken the collective bargaining rights of workers in public sector unions. In Friedrichs vs. California Teachers Association, the Court was projected to vote 5 to 4 to undermine workers and their unions.

After the unexpected passing of Justice Antonin Scalia, the Court split 4-4, effectively delaying the blow to collective bargaining.

Our Coalition of Unions bargaining team was back at the table with King County on May 25 for total compensation contract negotiations.

Much of the day’s discussion, both in our Union caucus and across the table from the employer, focused on the County’s proposal for a “Joint Labor Agreement.” With its proposal, the County is looking to find common terms among the myriad of County contracts.

Initially, our team resisted this concept. We were concerned that streamlining contract language could compromise the unique provisions that individual unions have developed in County contracts over the years through the collective bargaining process.

This summer, we will be having our Every Voice Counts Union gatherings for members at locations across King County.

This is your opportunity to share ideas and tell us what matters most to you. Get an update on current negotiations at King County and enjoy some some tasty food and refreshments!

Click on the corresponding link to RSVP. These are drop-in interviews, so choose the time and location that is most convenient for you. For more information, contact Karen Estevenin at 206-441-4860 ext. 1244.

Thank you to everyone who participated in our annual peanut butter drive.

On Wednesday, we delivered our peanut butter haul to the Pierce County Central Labor Council for distribution through the Emergency Food Network and its system of local food banks and feeding programs in Pierce County.

"Thank you for your incredible generosity and for your participation in this effort to help fight hunger," said John Scearcy, Secretary-Treasurer of Teamsters Local 117. "Teamsters 117 members know how important it is to give back to the community, and this is a wonderful example of that."

Our King County Coalition of Unions bargaining team was back at the table with the County on May 11 to continue total compensation contract negotiations for the 2017-2018 biennium.

Nine months into bargaining, progress has been slow, but we are still hopeful we can reach an agreement by our June deadline.

For the first hour of this session, our Union team met in caucus to finalize our economic counterproposal.

We focused on the highest priorities of the membership based on the contract survey results. These include an across-the-board wage increase in both years of the contract, adequate protection for our health and welfare benefits without premium share, and recognition for years of service to the County.

Our proposal addressed these economic issues on a coalition-wide basis while preserving an important degree of economic bargaining autonomy for each individual bargaining unit. We also established a timeframe for negotiating additional economic and non-economic items after an anticipated ratification vote this summer.

We presented our proposal to the County, and after a short discussion, both parties returned to caucus.