At Teamsters 117, we're making an effort to find new and innovative ways to connect with as many members at King County as possible.

Yesterday we had our first live webinar to give you an opportunity to learn about the tentative contract agreement from our total comp negotiations with the County. You can view the recorded webinar below:

We will have one more live webinar tonight from 7-8pm. You can register for the event here.

In addition to the webinars, we are holding 15 contract update meetings in locations across the County, including a meeting today in the King County Admin building (Lean Lab 300) starting at 11:30am.

Thank you so much for the important services you provide to our community. If you have any other ideas about how we can improve member communications, please let us know. 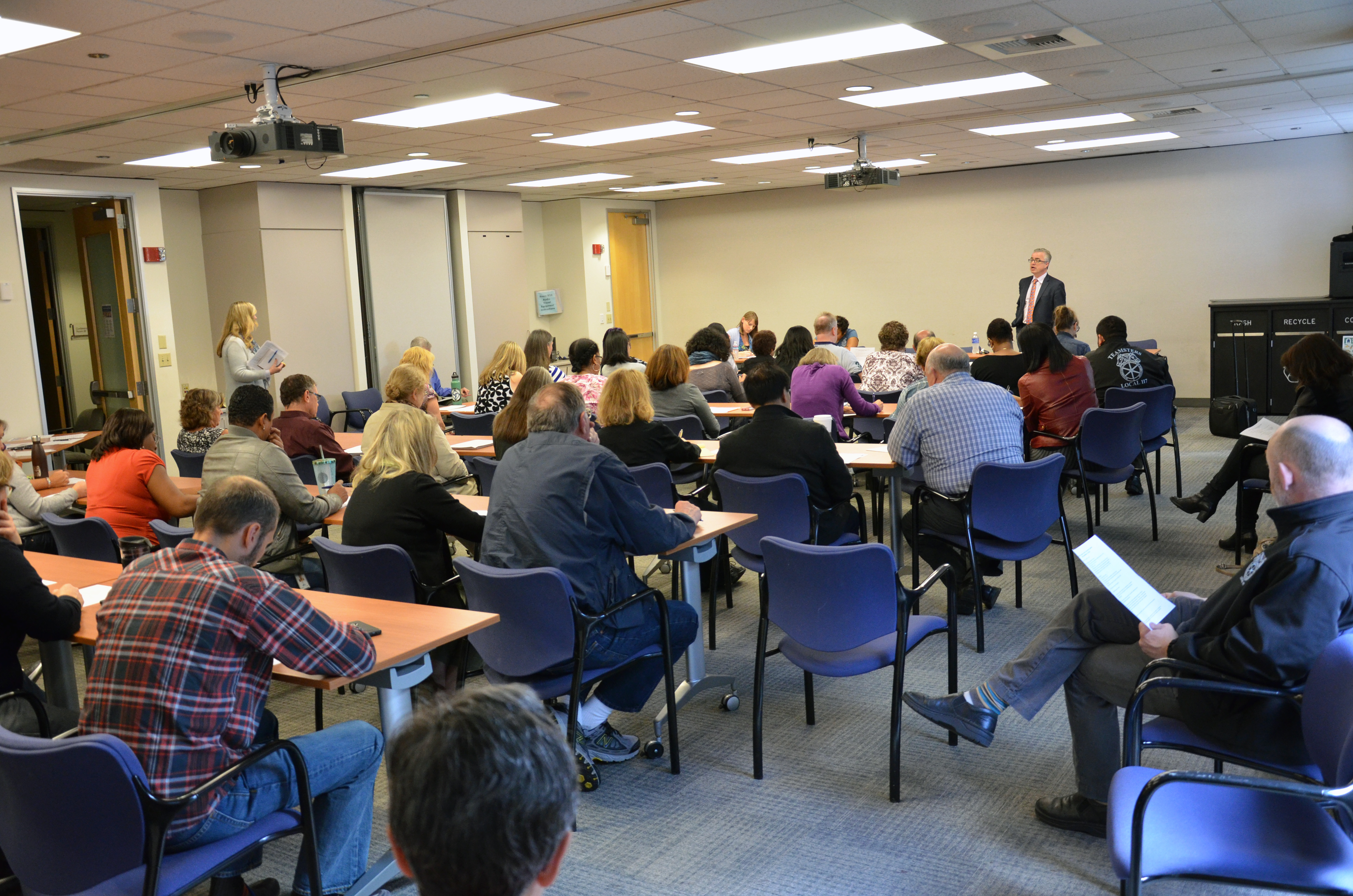 Our King County Coalition of Union has achieved a tentative agreement in total comp bargaining with the County. The proposal is fully recommended by the Union bargaining committee.

We will be holding contract update meetings in multiple locations around the County and two live webinars. The first webinar was held on September 28. You can view a recording of it below:

There will be one more opportunity to participate in a live webinar so you can ask questions.

At the meetings, we will present the proposal and you will have an opportunity to ask questions.

View the days, times, and locations of the meetings below.

I’m excited to announce a major breakthrough in our total comp bargaining with King County.

Late yesterday afternoon, our Coalition of Unions achieved a tentative agreement with the County over all compensation elements in your contract. The agreement is fully recommended by your Union bargaining committee.

The agreement includes a 2.25 percent general wage increase in 2017 for all coalition members and a 2.75 percent increase in 2018 provided that the Union signs onto a separately-negotiated Master Agreement by the end of next year.

For the first time, the work of King County Union members will be recognized through a Coalition Premium and a separate wage table for Coalition members.

The agreement will increase the employer contributions to your health and welfare coverage. This means you will not pay any additional health care premium costs for 2017-2018.

You can view an update from the Coalition with more details about the agreement here.

Our journey through the total comp bargaining process started over a year ago. It’s been an incredibly challenging experience. There have been many points along the way when it looked like negotiations would fall apart.

Our commitment, perseverance, and the outstanding work of your Union bargaining committee kept us together. Our team brought the voice of the entire membership to the table in powerful, persuasive ways.

I hope you’ll join me in extending my gratitude and appreciation to our entire team.

Over the next several weeks, we will coordinate meetings across the County to discuss the proposal. You will have an opportunity to vote on the agreement before the end of the year. We’ll let you know as soon as we have more information about the voting process.

Thank you for the important service you provide to our community and thank you for your membership in Teamsters Local 117.

Every Voice Counts Project Continues to Grow At King County 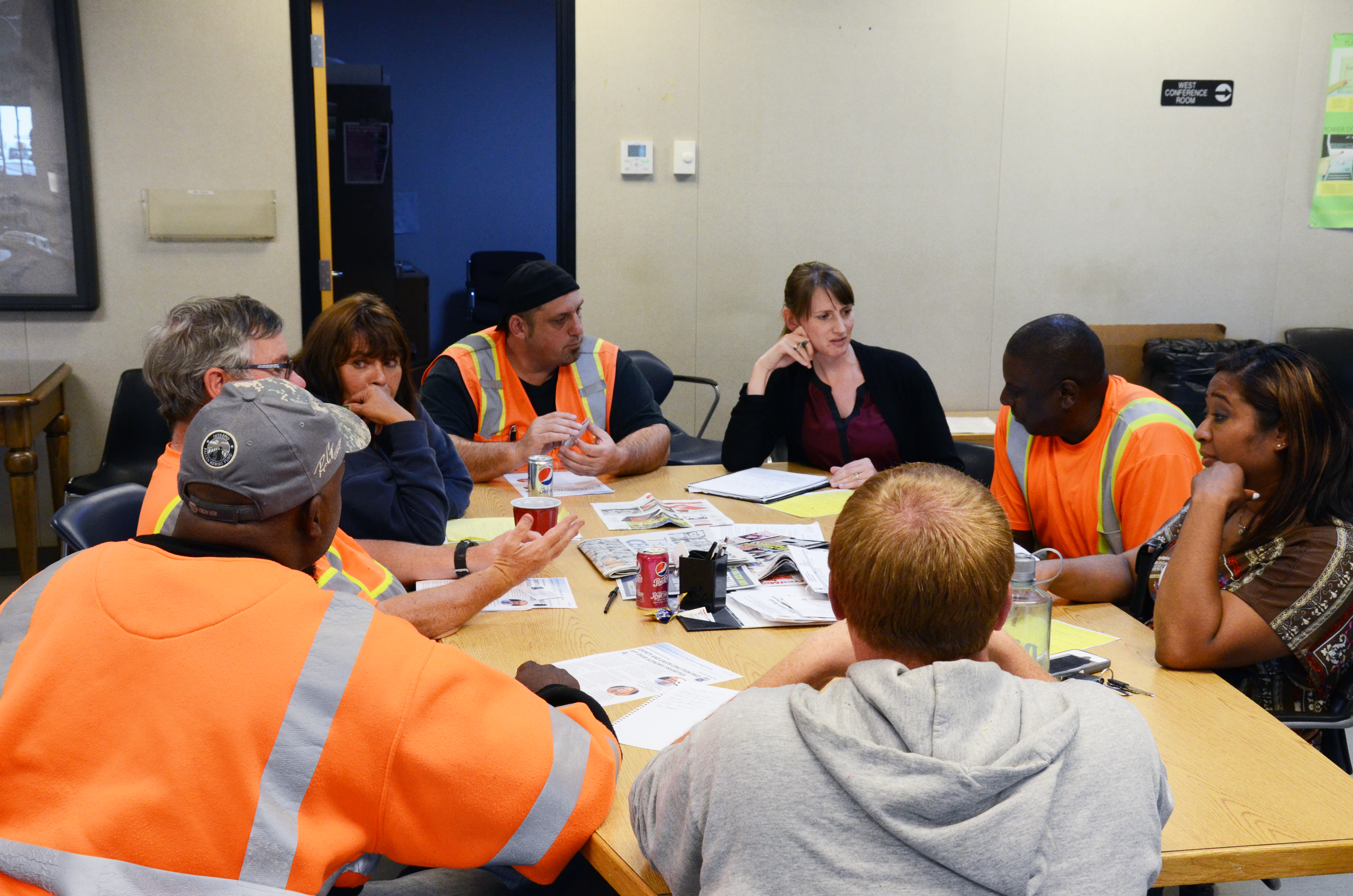 From the King Street Center in downtown Seattle to the Roads Maintenance shop in Fall City, Local 117 members at King County have been building member power.

Teamsters across King County are meeting as part of our Every Voice Counts project. This project builds strength through member engagement.

Teamster Zookeepers Invite You to Bowling for Rhinos Fundraiser! 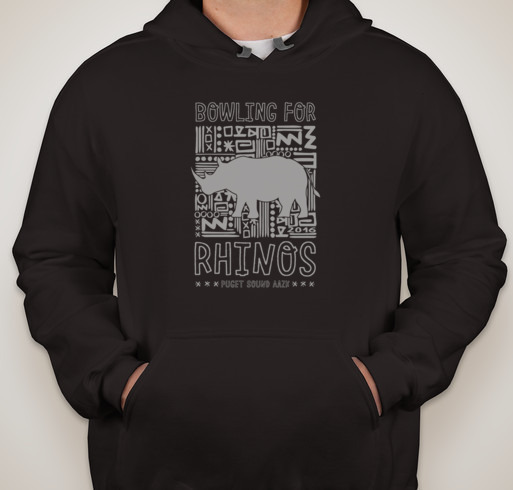 Our members at the Woodland Park Zoo are active in organizing the annual Bowling for Rhinos fundraiser.

This is a great, family-friendly event that helps support rhino conservation around the world. The event will take place on Sunday, September 11 at the University of Washington Hub games area. There will be bowling, pool, a raffle and an awesome buffet dinner.

If you can't make the bowling party, you can help strike out extinction by ordering a Bowling for Rhinos T-Shirt.

Our Teamsters 117 E-Board made a contribution to support the event at our members' request.

Any Teamster interested in participating or supporting the event can get in touch with Stephanie Miller at stephaniemiller3@me.com.

We may be on the verge of an important breakthrough in our Total Comp negotiations with King County. This is great news, especially given the profound challenges we have faced over the last nine months of bargaining.

The County is still reviewing our latest proposal and will likely respond soon. Although we have not yet reached a tentative agreement, we are cautiously optimistic that a deal we can recommend to the membership is within sight.

Our Coalition of Unions met with the County again on Friday, July 29. In that session we made significant progress toward our goals. Those goals include across-the-board wage increases in both years of the contract, protection of our health and welfare benefits without premium share, and a separate wage table for Union Coalition members.

We still have no clear answers in our effort to achieve a Total Comp agreement for Union members at King County. Our Union Coalition has put forth a comprehensive economic counterproposal and offered a clear pathway forward on a Joint Labor Agreement.

Now the ball is in the County’s court. Whether the County responds by recognizing King County Union members for the outstanding service they provide to the public or the employer continues down their current unproductive path will likely be determined in what could be our final bargaining session on Friday, July 29.

Negotiations got off track several weeks ago after the County abruptly introduced the idea of a Joint Labor Proposal (JLA), then tried to impose it on us by tying it to their economic proposal.

We expressed concerns about the County’s concept for the JLA from the start because it compromised important individualized provisions in our collective bargaining agreements. We also insisted on more equitable wage increases and health and welfare protections that reflect the cost of living in the Seattle metropolitan area.

Q&A with a Local 117 member: Labor's role in a green economy

As we wrestle with the shift to a renewable economy, it's critical workers have a seat at the table. We spoke with Rick Reinlasoder, Livestock Program Specialist at King County about why environmental issues matter to union members.

A: I grew up on a dairy farm in western Montana and interacted with the environment (soil, water, plants and critters – wild and domestic) on a daily basis. I’m naturally curious and began to ask questions about natural resources and how they were managed. My brother and I questioned the use of conventional chemicals and practices on the farm and tried to find alternatives, where possible. We continue that effort today, as we now own most of the farm in partnership.

Q: Why should environmental issues matter to union members?

A: We all interact with the environment and its health affects our lives directly. Environmental messes and degradation are left for future generations to deal with. Sometimes it takes a great deal of energy to make positive change and the strength of the union (many voices) might help influence that change.

Teamsters Local 117 has been a labor leader in the environmental movement by ensuring the transition to a green economy doesn't leave workers behind.

Our Union's Director of Organizing and Strategic Campaigns, Leonard Smith, speaks out during the Climate March last year.

In the past, the issue of climate change has been framed by corporations and some government agencies as a choice between the “environment or jobs”. That is a false choice that only divides workers and communities.  It is critical that, as the nation wrestles with the shift from a fossil fuel economy to a renewable economy, the voices of workers and their communities have a seat at the table.

Last year, while the labor movement in Seattle found itself divided over the issue of Shell Oil leasing Terminal 5 for its Arctic Drilling preparation, Local 117 played a leadership role in organizing labor opposition to the Port of Seattle’s lease with Shell and gained national attention for our work around Terminal 5.

I was invited to attend a national convergence on climate change and labor sponsored by the Labor Network for Sustainability.

Currently, we have open positions for Shop Steward at the King County Prosecuting Attorney Office.

There are postings for Shop Steward at every PAO location. If you’d like to become a Shop Steward, please print your name on the posting at your location, or print out the document here, sign it and send it back to me before July 20.

The Shop Steward posting will be located on your Union Board within your location, this board can usually be found in an open area, copy room, and breakroom/lunchroom.

King County and Union Coalition Face Off over Economics

After several months of bargaining, our Union Coalition’s negotiations with King County have become more polarized.

“I don’t see that the County is willing to move on any of the goals that labor has put forward.”
DAN FERNANDEZ Prosecuting Attorney Office

The Union Coalition is sending a strong message that this simply will not ratify given the economic growth and increased cost of living in the Seattle metropolitan area.

On Wednesday, July 5, the County presented us with a formal counterproposal on all economic issues including wages and health and welfare benefits.  However, the County’s proposal did not involve any meaningful movement and was largely a reiteration of its prior offers.

The County also rejected our proposal to universalize and improve the above top step pay systems. As you might expect, the Coalition’s negotiation team was disappointed and frustrated by the County’s failure to respond to our economics priorities.

“It’s extremely disappointing. I don’t think the County is coming to the table to actually bargain. It seems to be: Here’s the plate. You can either eat from it, or too bad you can just walk away.”
CHERYL ANN GUNDERSON, IT Manager