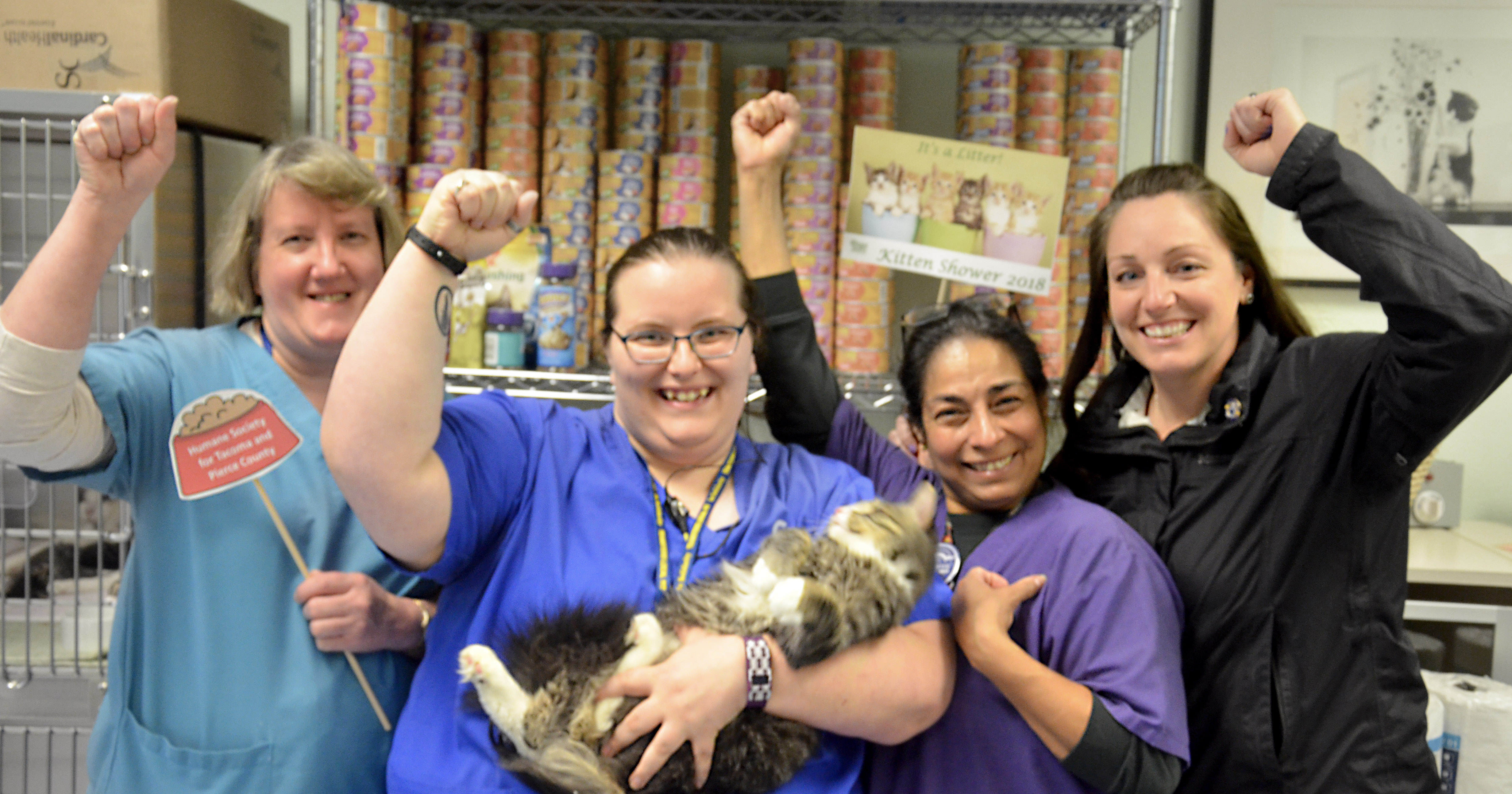 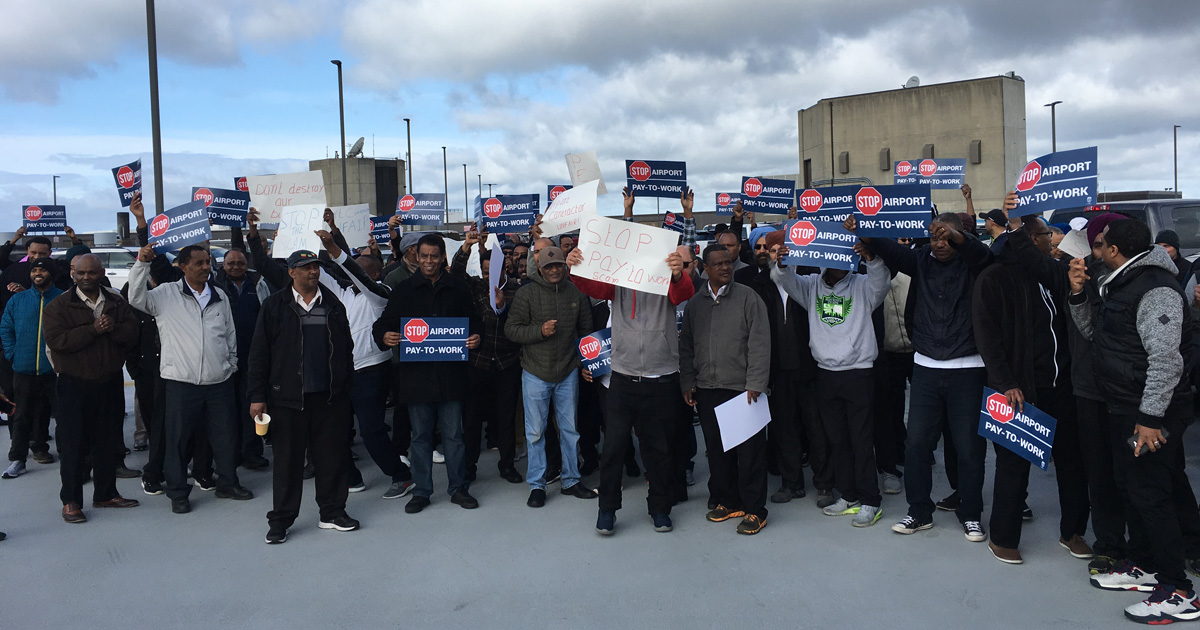 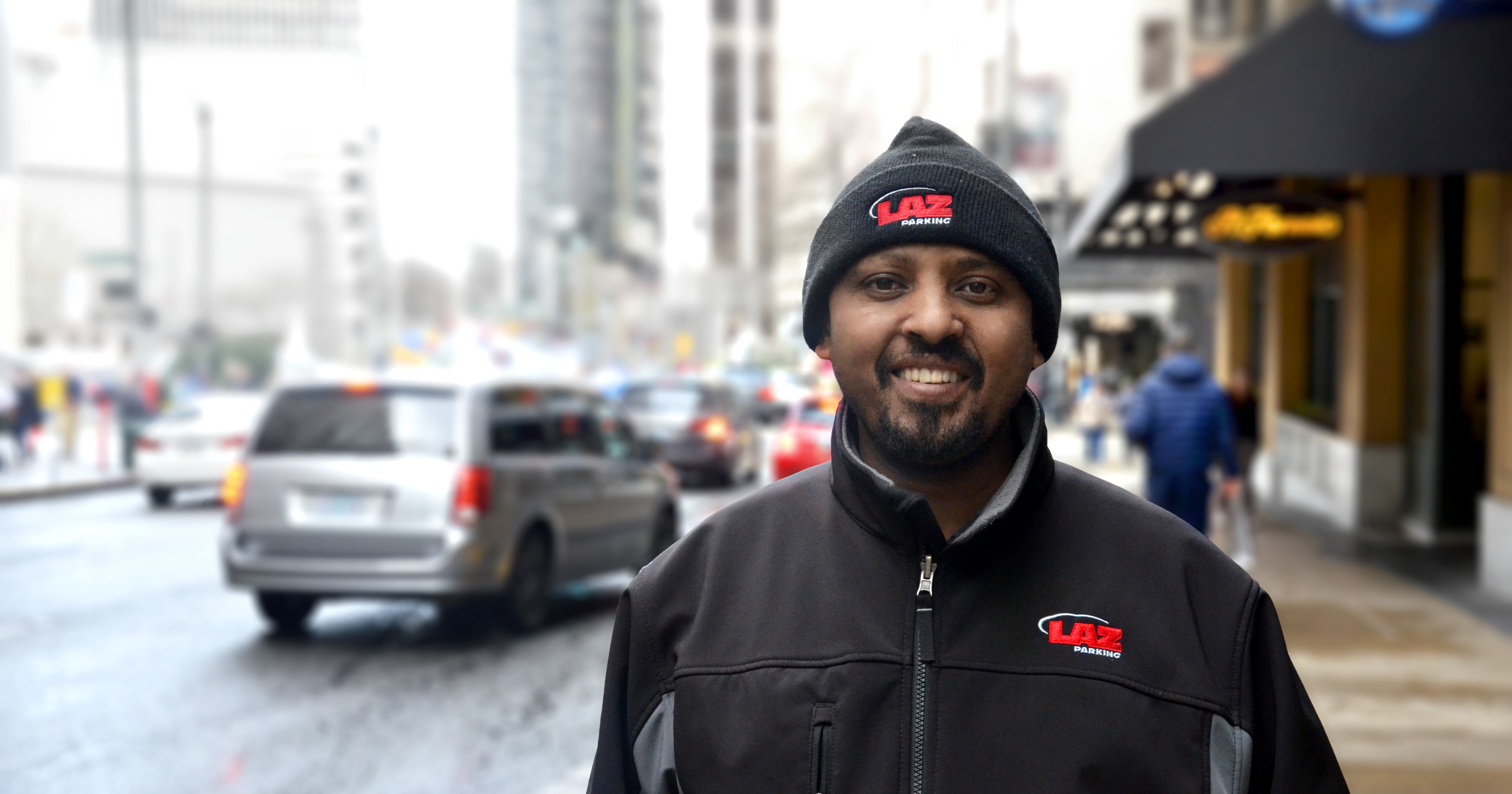 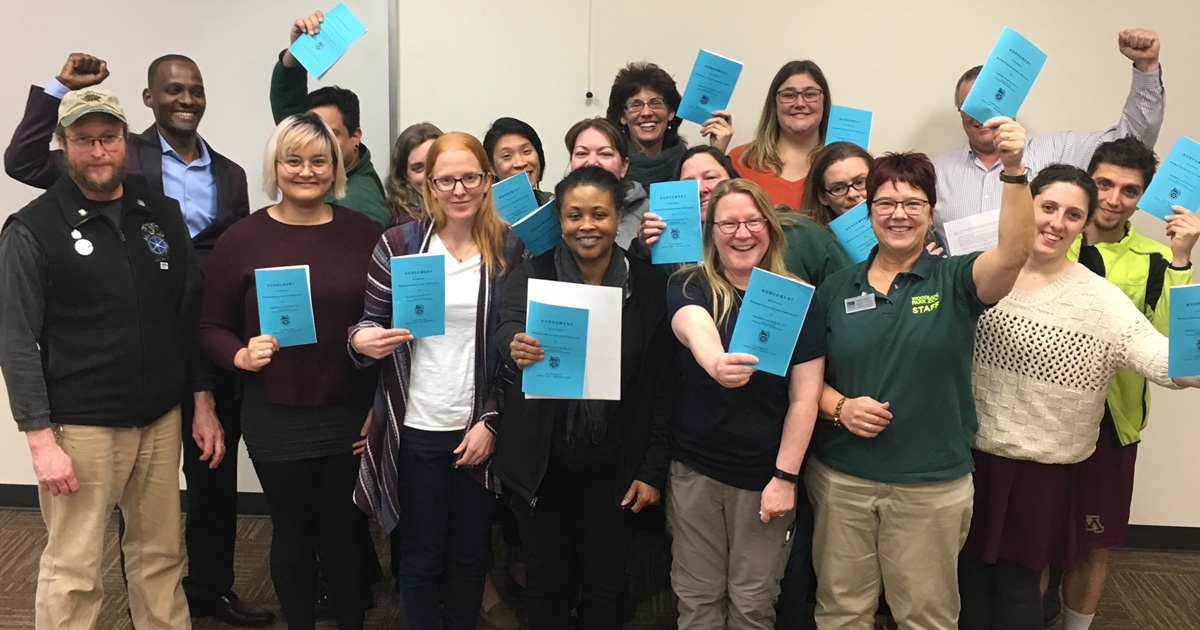 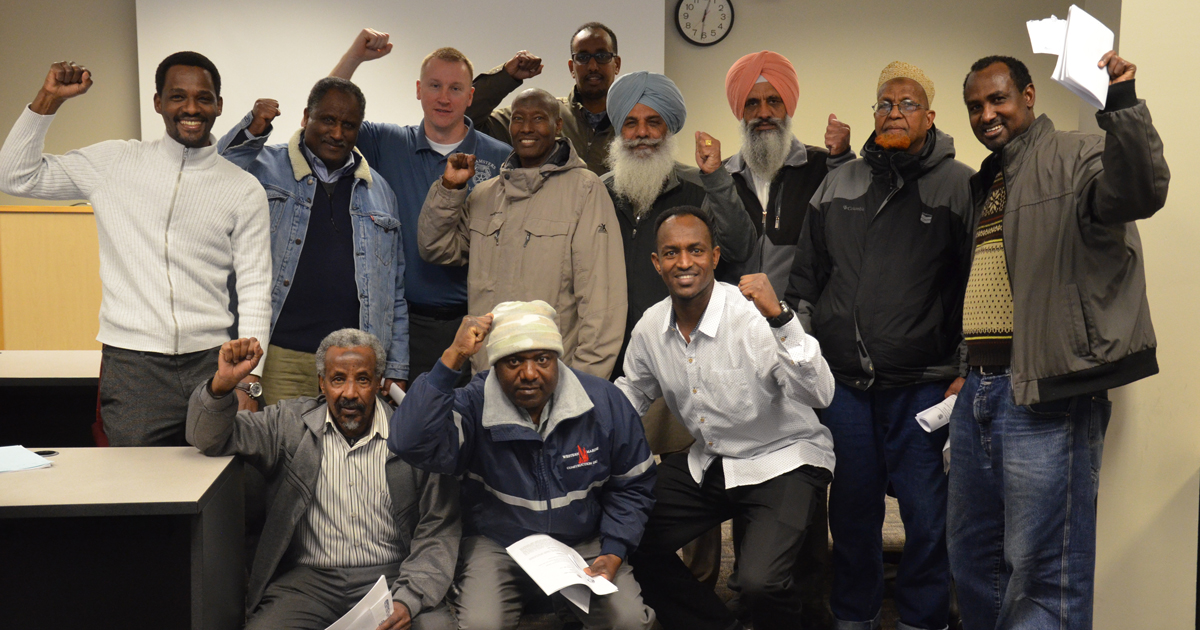 Teamster airport drivers who work at Fleetlogix celebrate the ratification of their new four-year contract on March 27.

The contract vote ends a year-long battle with the employer, who for months wouldn't budge from a number of proposed takeaways, including cuts to the workers' vacation benefits and seniority rights.

From the start, the group of over a hundred members held strong. They turned out for union meetings, wore solidarity buttons, and signed a petition calling for dignified conditions at work.

“We need to stand up for our co-workers and our community,” said Hassan Mohamed, in the midst of the contract campaign.

"We need to stand up for our co-workers and our community."

With scant progress at the bargaining table, the group organized a "march on the boss" action last November. Dozens of workers on shift confronted management at Fleetlogix. They also took their demands to the Avis-Budget Group, the rental car outfit that contracts with Fleetlogix to transport vehicles around Sea-Tac Airport.

In the end, the workers' unity and determination ruled the day. Backed by an engaged membership, our bargaining team held firm against takeaways and won meaningful improvements for the group.

"This campaign was successful because workers played the central role," said John Scearcy, Secretary-Treasurer of Teamsters 117. "They stood up and spoke out against unjust conditions and inadequate proposals. They worked for months without a contract and never relented. Their solidarity made the difference." 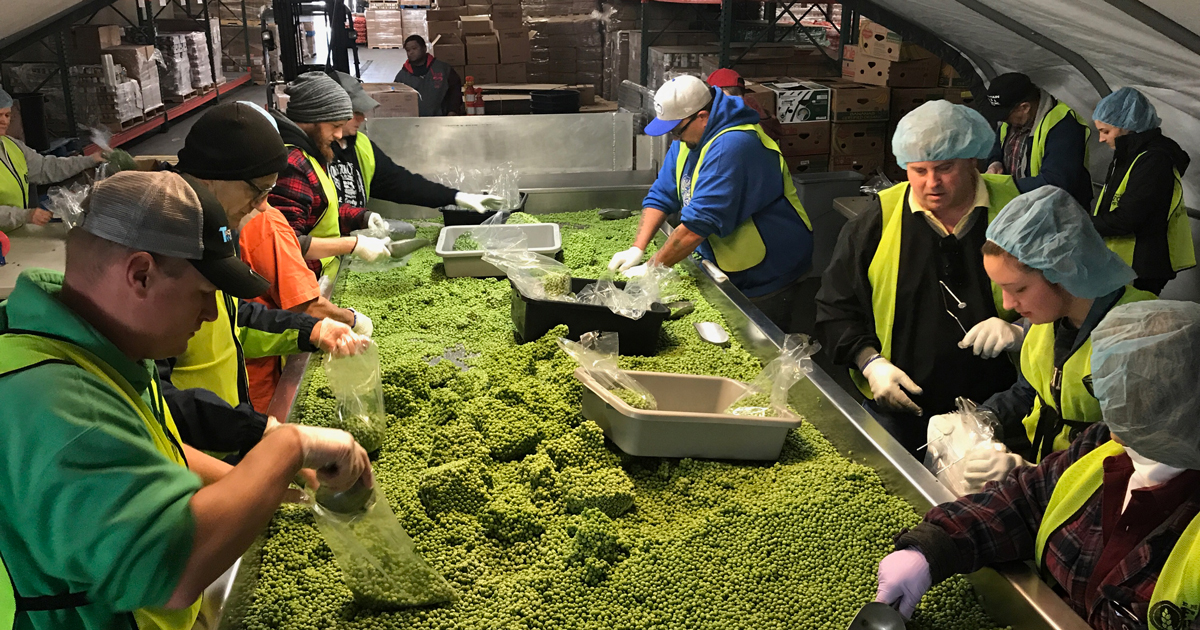 Local 117 members packing up veggies for families in need at the Emergency Food Network warehouse in Tacoma.

On March 3, we did it again! Over a dozen Teamster volunteers came together at an Emergency Food Network (EFN) warehouse in Tacoma to repackage over 5,400 lbs of frozen vegetables in three hours for hungry families in Pierce County.

EFN is the primary food distributor to more than 60 emergency food sites in Pierce County. It enlists volunteers to help repackage fresh, frozen, and dry bulk foods into smaller, family-sized portions that will be distributed to the areas food banks.

“I appreciate my union facilitating this opportunity to volunteer,” said Brandon Sitko, a member from Lineage Cold Storage who has been volunteering with Teamsters at EFN since the first event in April of 2014. “My family joins me, and we always feel good knowing we made a difference.”

“It is only a three hours of my time on a Saturday that mean so much to others in need," added Jason Hernandez, a Teamster at Americold. "I am proud to be part of this and prouder to be a Teamster.”

"My family joins me, and we always feel good knowing we made a difference."

Since 2014, Secretary-Treasurer John Scearcy has made it a priority to connect staff, members, their families and friends through community volunteerism.

“At every event we build teamwork and strengthen our commitment to each other and the community,” he shared with the group of volunteers. “This is a small example of what we can do together collectively and achieve something that none of us could have accomplished alone.”

We are already planning another volunteer day at EFN. If you would like to volunteer for future Teamster efforts to help feed families in need, give us a call at 206-441-4860. 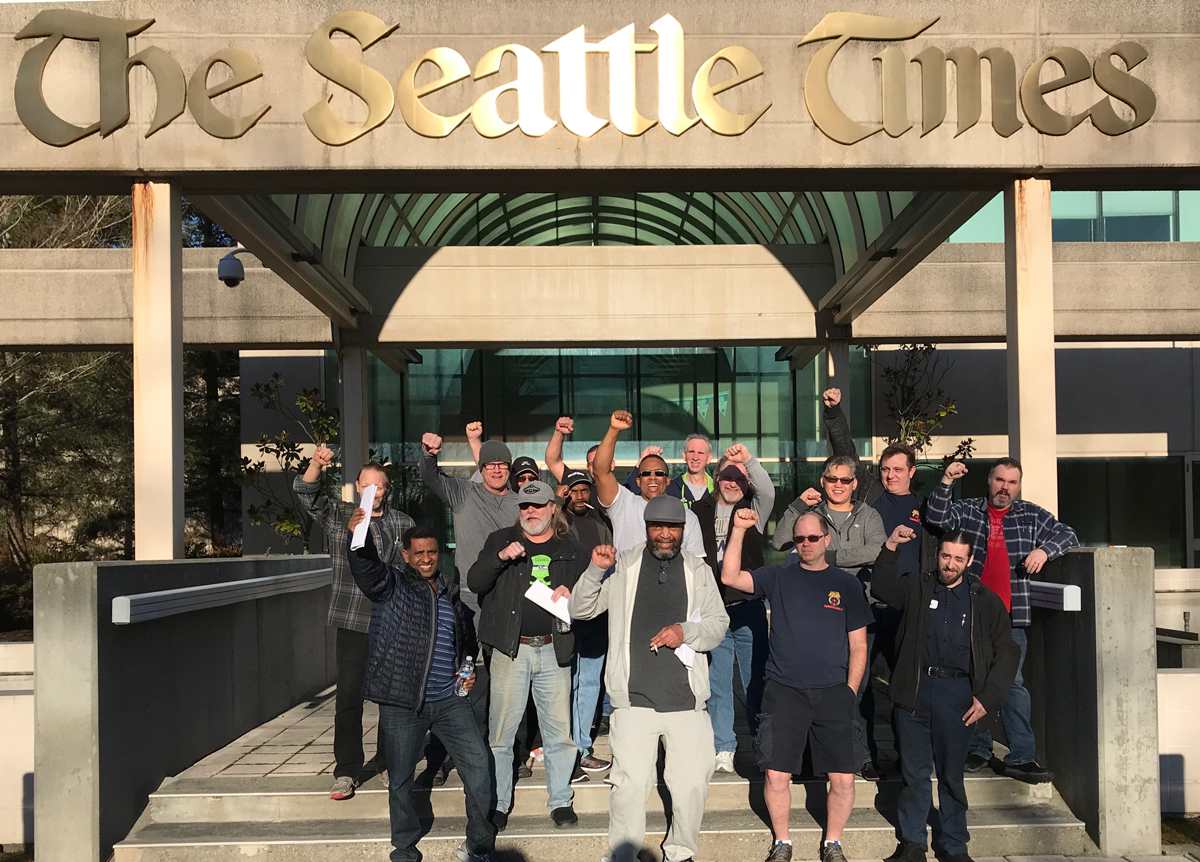 Teamster press operators at the Seattle Times celebrate after ratifying their contract.

Teamsters who operate the presses at the Seattle Times are celebrating their new contract. The group voted overwhelmingly to ratify the agreement last weekend.

Highlights of the pact include a meaningful bump in hourly wages and improvements to sick time and holiday pay.

“We’ve been trying to get double time and a half for holiday pay forever,” said Tyrone Love, a shop steward and pressman of 22 years. “This time we were able to get it for three of the major holidays – Christmas, New Years, and Thanksgiving. Guys are really happy about that.”

Teamsters pushing back at Fleetlogix 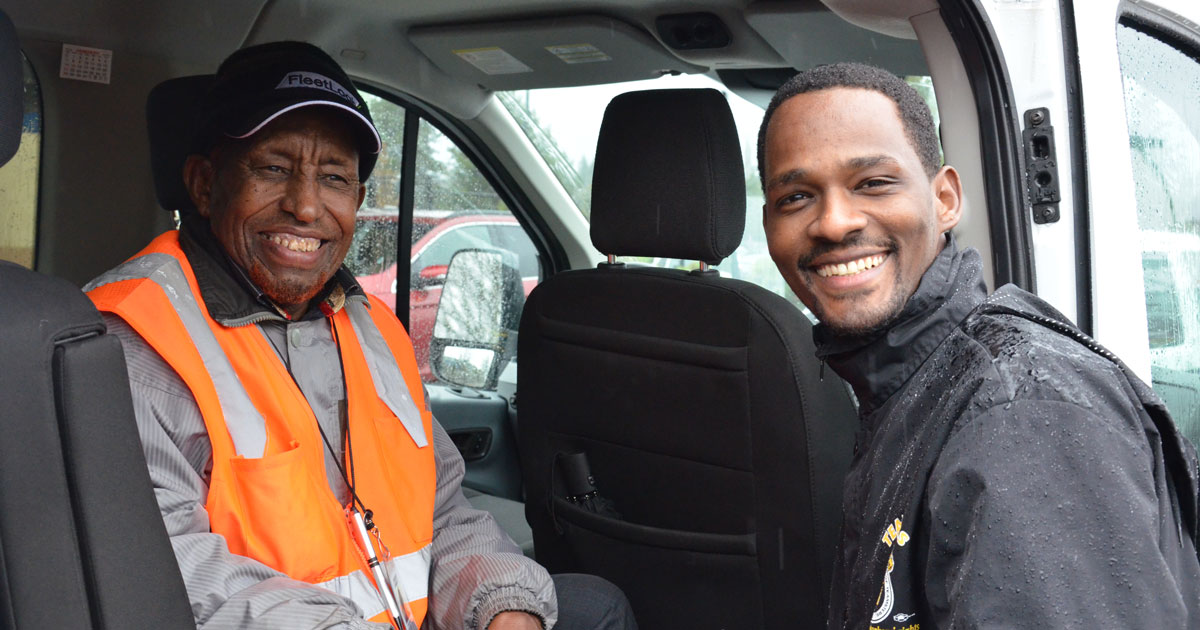 Great to see members who work at the airport's rental car facility today.

A manager at one of the transportation companies - Fleetlogix - tried to block our visitation access last week and we pushed back in a big way. The company has already been sanctioned by the NLRB for intimidating workers who were wearing buttons supporting the union.

We'll be negotiating again on January 19 and 24. It's time to get a fair contract that respects our members and the important services they provide! 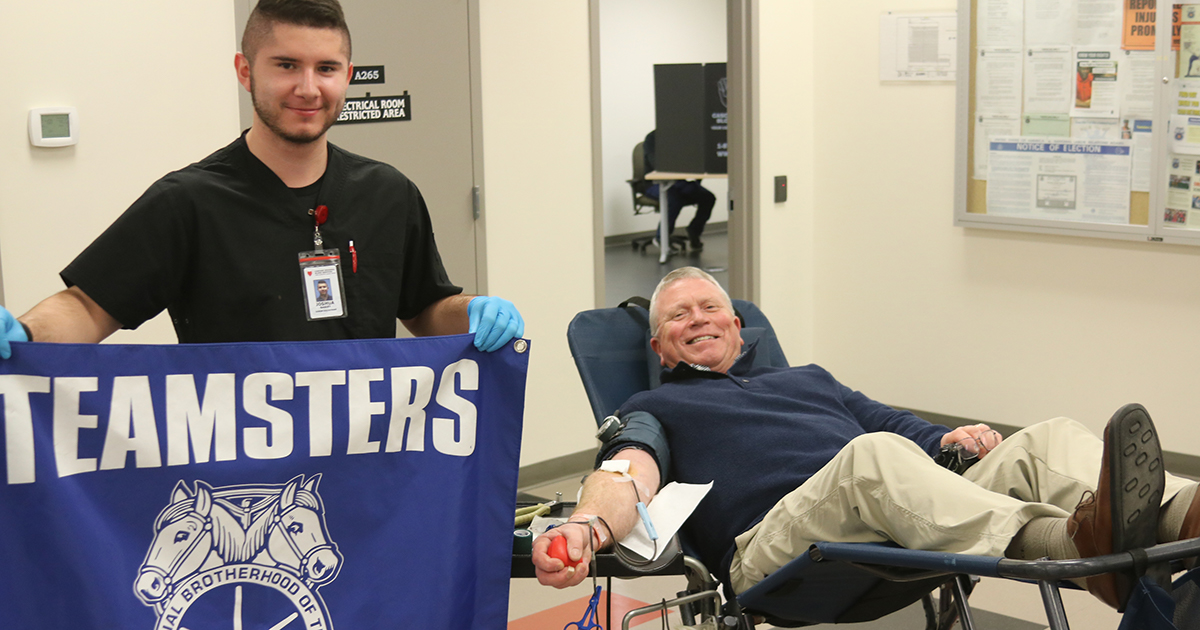 Scott Anderson giving the gift of life in the Safeway breakroom in the Auburn warehouse.

Under the quiet exterior lies a man of great compassion and conviction who exudes a moral authority and a desire to help others through his actions.

Scott has served our Local 117 membership as a trustee on our union's executive board on and off for 20 years.

Since the mid-1980s, he has organized semi-annual blood drives for his co-workers in the Safeway warehouse. Over that time span, thousands of Teamsters have donated their blood to help save lives in our community. Their donations complement our union’s annual blood drive that takes place at the Teamsters hall each November.

"The Teamster blood drives come at a really important time of year for us."

“The Teamster blood drives come at a really important time of year for us,” says Robin Lulich, a donor resource consultant with Cascade Regional Blood Services. “There is usually high blood usage before and after the holidays. The Teamsters help boost the inventory back up.”

That means ensuring that there are ample blood reserves when disaster strikes, like when an Amtrak train derailed in Dupont last month. Cancer survivors, burn victims, surgery patients, sick kids – they all benefit from donated blood.

For Scott, the impetus to enlist his co-workers touches close to home.

VIDEO: Thank you firefighters for your heroic work in saving the animals

A year ago, a fire broke out at the Woodland Park Zoo and threatened hundreds of animals.

Thanks to the heroic work of Seattle-area firefighters, nearly all of the animals were saved. On behalf of all members of Teamsters 117, shop steward Peter Miller sends his gratitude to the firefighters for their heroic work in saving the animals.

Thank you firefighters and happy holidays!