If you or a family member is currently seeking to normalize your immigration status, President Obama's Immigrant Accountability Executive Action could impact you!

Click here for the flyer in Spanish and English. 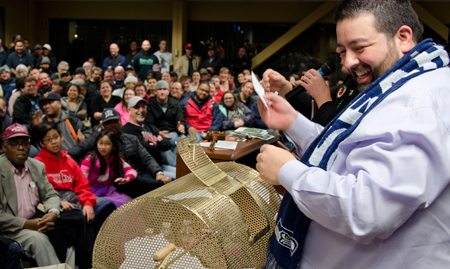 Our Holiday Membership Meeting was a hit again this year, with hundreds of members packing the Union hall.

We spent the first half hour or so sharing the year's exciting news before the gift giving commenced.

It's been a major year for our Union, as Local 117 members have won important victories, through progressive legislation, political action, in negotiations, in arbitration, and perhaps most significantly, by bringing hundreds of new members into the Union.

Check out photos from the holiday meeting here!

Do you have medical coverage with the Washington Teamsters Welfare Trust?  If so, it's time to re-enroll!

All Local 117 members covered by WTWT plans must complete their annual 2015 re-enrollment to ensure timely processing of medical claims.

SAVE MONEY ON MEDICAL EXPENSES - TAKE YOUR PERSONAL HEALTH ASSESSMENT!

Take your Personal Health Assessment and designate a Primary Care Physician by January 9, 2015 to save hundreds off your 2015 medical expenses.

Taking a Personal Health Assessment (PHA) and designating a Primary Care Physician (PCP) will lower your annual deductible in 2015 by $200 per person and up to $600 per family.  To be eligible, you and your spouse or covered domestic partner must take the PHA and designate a PCP.

Take the Personal Health Assessment and designate your Primary Care Physician by January 9, 2015 at https://wateamsters.online.staywell.com, or call StayWell at (888) 388-8259 for a paper form.

On November 22, 2014, Western Washington Taxi Cab Operators Association (WWTCOA) held its annual membership meeting. There was much excitement about electing the 2015 Leadership Council and lively discussion around the proposed amendments! 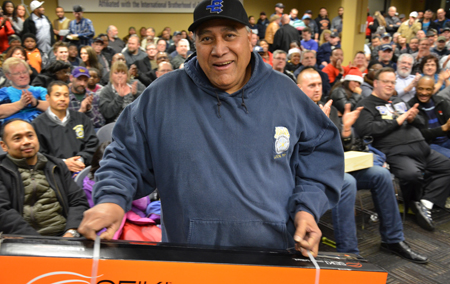 This year, we'll be holding our Holiday Membership Meeting and annual raffle drawing on Thursday, December 18 starting at 7 P.M. at the Union hall in Tukwila.

Dozens of prizes will be awarded at the event, including electronics, power tools, bottles of wine, gift cards, televisions sets, and best of all, NUTS!  All of the gifts are purchased from companies with whom Local 117 has a bargaining relationship.

Got Teamsters medical? The WTWT has a new home

For information about your WTWT benefits, wellness program, in-network doctors and dentists, and other resources, visit the WTWT website at www.wateamsters.com.

For more information about the new website, check out a PDF summary document.

Remember, too, that December 19 is the last day to receive the incentive for completing your WTWT Personal Health Assessment.

Three Days of Paid Sick Leave is Not Enough for the 253!

On Tuesday, December 16, the Tacoma City Council will be taking action on the Mayor’s Paid Sick and Safe leave proposal.

This is good news for Tacoma workers - the problem is that the Mayor is proposing just 24 hours of paid sick leave per year and it excludes Union workers from the right to earn paid sick days.

Tell Congress to protect pensions and vote NO on spending bill!

Please e-mail your Representative and Senators today and ask that they vote NO on the omnibus spending bill.

Last night, Congress released the text of an omnibus spending bill to fund the government for fiscal year 2015, and the Teamsters Union was very disappointed to see that the government will be kept open on the backs of hardworking Americans and retirees.

Specifically, we are opposed to the last-minute addition of a pension amendment that threatens the retirement security of thousands of retirees -- an amendment that through procedural manipulation will not even receive a separate vote.

In September, Teamsters Local 117 sent twelve members and staff to Chicago for the 2014 Teamsters Women’s Conference.  Through speakers and workshops, the conference “showcased the impact unions have on women and the importance of women leaders,” explained Teamsters 117 Legislative Affairs Coordinator, Brenda Wiest.

If you live in the City of Tacoma, we have good news! Tacoma Mayor Marilyn Strickland has announced she will introduce a paid sick leave bill this Tuesday.

What’s not good is that she negotiated provisions with corporate interests rather than focusing on protecting family and public health. The people of Tacoma need our help now to win a strong paid sick and safe leave law.