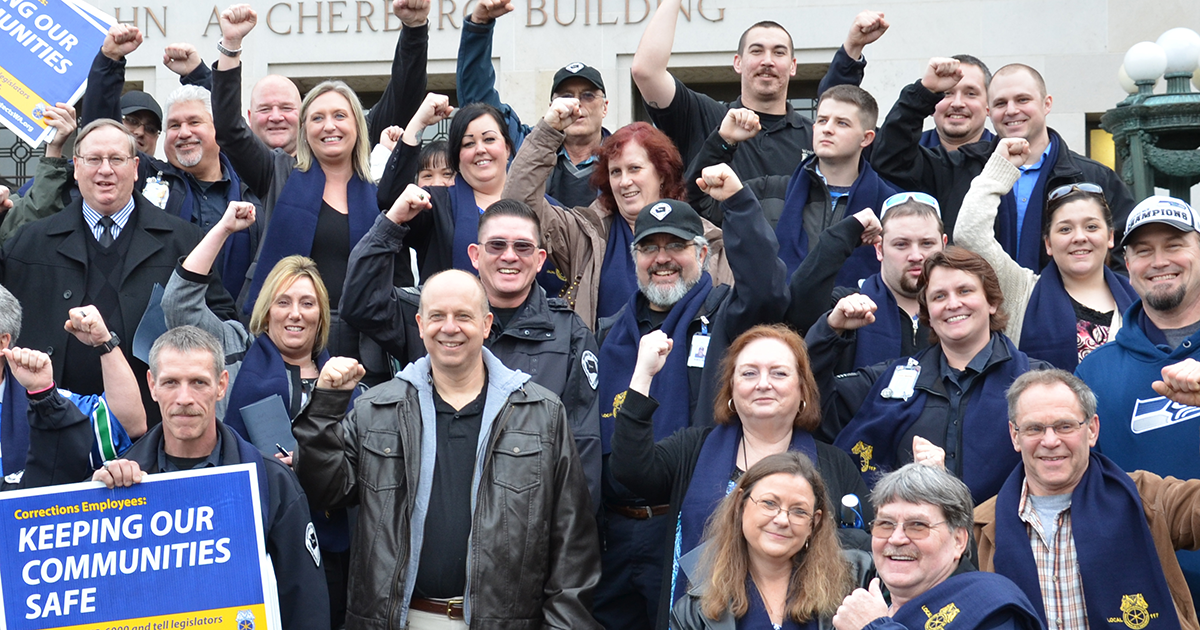 The Washington State Legislature will be in session starting on January 9, 2017.

Teamsters 117 employs a full-time Legislative Affairs Director, Brenda Wiest, who will be on the ground every day in Olympia working to protect the rights of Local 117 members and their families.

We have two scheduled two formal Lobby Days for Local 117 members during the 2017 session - a DOC Legislative Reception & Lobby Day on February 13-14 and a Public Service Matters Lobby Day on February 20. If you would like to participate in either of those events, contact Dustin at 206-441-4860 ext. 1262.

Here are our top legislative priorities for 2017:

1. SUPPORT THOSE WHO PROTECT US
Fund the DOC Contract

Corrections employees put their lives on the line to serve and protect our communities, but are significantly underpaid for the important public safety work they perform. Correctional officers, for example, are paid 37.44 percent less than those at county corrections after ten years of service. Other classifications at DOC are similarly underpaid. A neutral arbitrator has awarded our DOC members a minimum 10.5 percent wage increase over the coming biennium. The state’s Office of Financial Management has deemed the award financially feasible and the Governor has included our contract in his budget. Now it’s up to the state legislature to ensure that our contract gets funded and corrections employees get the respect they deserve.

2. STAFFING AND SECURITY AUDIT FOR DEPT. OF CORRECTIONS
Pass a Capital Gains Tax

Our economy is out of balance. The middle class is shrinking and working families are shouldering a heavier tax burden while rules have been manipulated to favor big corporations and the wealthiest 1%. We need tax reform to ensure fairness for working families and so that the legislature can meet its obligations to public safety and education. The capital gains bill proposed last session would have generated a projected $798 million in revenue for 2017. Forty-one other states all tax capital gains.

3. PROTECT THE PRIVACY OF PUBLIC EMPLOYEES
Modify the Public Records Act to Protect the Personal Information of Public Employees

We need to ensure that the personal information of public employees is protected while at the same time providing the public with access to records of governmental activities. This balance can be achieved through modifications to the public records act. Public employees have legitimate concerns about their safety when they interact with felons or make custody and visitation decisions. The home addresses, personal phone numbers or personal email addresses of public employees should be excluded from public disclosure for commercial purposes.

4. SHARED PROSPERITY FOR EVERYONE

Teamsters Local 117 is part of a broad-based coalition supporting efforts to create an economy that works for all of us – not just big corporations and the wealthiest 1%. Our goal is to rebuild the middle class, protect and invests in jobs with dignity, and defend against attacks meant to weaken the rules that support working families. We will be supporting public policy that: