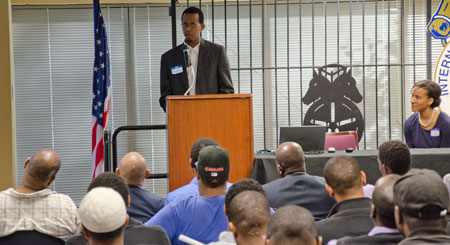 The event comes just under a year after the founding of the App-Based Drivers’ Association last May.

“We need an association so we can have a voice, unity, and respect,” said Hussein Farah, as he addressed limousine drivers and other app-based drivers from Uber, Uber X, Lyft, and Sidecar. “This unity for the association helps us protect our rights.”

Drivers were joined at the event by community and elected leaders, including members of the King County Council, and the Seattle City Council, as well as representatives from the Ethiopian and Sudanese community centers.

“My job as a city councilmember is to make sure that drivers are treated fairly.”

At the event, drivers voted to approve by-laws for association, and they elected a 13-member leadership council for the coming year. The association aims to promote fairness, justice, and transparency in the industry while ensuring driver and public safety.

Over the last several months, hundreds of drivers have attended meetings at the Teamsters Union to discuss these issues. Drivers initially sought the support of the Teamsters after Uber cut the drivers’ pay by 15% in February. The company ultimately reversed the rate cut after drivers demanded that Uber fully restore the previous rate.

“We stand together with app-based drivers as they organize for better working conditions and fair pay,” said John Scearcy, Secretary-Treasurer of Teamsters Local 117. “As Teamsters, we know that workers who are being exploited can take on $40 billion companies like Uber and win. Because as Teamsters, when we fight, we win.”

View photos from the event here.